It’s time to get lost in the musical and lyrical universe developed around a pervasive feeling of “weltschmertz” by this distinguished Romanian Funeral Doom act.

Founded in 2010 in Rădăuți, Suceava County, in Romania, but currently located in Cluj-Napoca, Cluj County, also in Romania, an idiosyncratic Doom Metal/Funeral Doom entity known as Descend into Despair has been gradually rising from that point into one of the most noteworthy bands in the local scene, fusing together Death, Black and Sludge Metal with Electronica and Dark Ambient elements to further refine what they like to call “Introspective Doom Metal”, pushing creative boundaries and taking pride in experimenting as much as they can. The band currently comprised of Xander Coza on vocals, analogue synthesizer and guitars, Florentin Popa on clean and choir vocals, lap steel guitars and field recordings, Dragoș C. and Cosmin Farcău on the guitars, Alex Costin on bass, Flaviu Roșca on keyboards and piano, and Luca Breaz on drums developed a musical and lyrical universe around a pervasive feeling of “weltschmertz”, a brooding and ever-looming feeling that physical reality can never fully satisfy the demands of the mind. Now in 2020 the band returns with their third full-length opus, simply titled Opium, offering fans of Funeral Doom almost one hour of cryptic and melancholic passages split into three unique compositions, all embraced by a stunning cover artwork conceptualized by Xander himself, featuring model Melinda Nagy, painting by István Bába and bodypaint by Brigitta Adorjan. “Opium’s conceptual driving force is, we believe, fully grasped within this image, blurring the lines between painting and photography. Twisting classical beauty into modern obsession, weaving harmony of proportion into the disharmony of meaning that soaks through the fabric of existence, our Venus rises forth from horror and remembrance, drained by her rebirth, as murky as the sea that bore her,” commented the band about the connection between the concept of the art and the musical content of their newborn opus.

Featuring guest female vocals by Tara Vanflower, an atmospheric and peaceful start slowly and gradually evolves into a lugubrious feast of doom in ensh[r]ine, with the band’s guitarists Dragos and Cosmin meticulously smashing their stringed axes while Luca brings the thunder with his potent beats. Furthermore, Xander sounds like a beast from the pits of hell with his deep guttural gnarls, with the crisp and crystalline background keys and synths by Flaviu adding a touch of finesse to their mournful musicality. In other words, it’s truly impressive how they fill every single space in the air with tons of heaviness but sounding melodic and ethereal at the same time, ending such massive composition in a beyond enfolding way. Then sinister, atmospheric sounds and tones permeate the air in the also extensive, multi-layered and utterly doomed antumbra, where Xander’s gruesome roars get even more introspective and grim accompanied by the sluggish and melancholic beats by Luca, while the raw sounds of the guitars generate a beautiful paradox with all background keys and synths, also presenting several breaks and variations throughout its 17 lugubrious minutes, and once again bringing an orchestral, cinematic vibe until the very end. Lastly, an array of guests doing choir vocals and spoken pieces are one of the main ingredients in the pensive and obscure closing tune dis[re]member, where the delicate piano notes by Flaviu and the slow and steady beats by Luca walk hand in hand in a hypnotizing Doom Metal voyage. It’s by far the most intricate and the darkest of all three songs, with Dragos, Cosmin and Alex bringing an otherworldly vibe to the music with their sonic weapons, not to mention the breathtaking final act showcasing grim spoken words, crisp guitars and infernal roars amidst a perturbing sense of hopelessness. 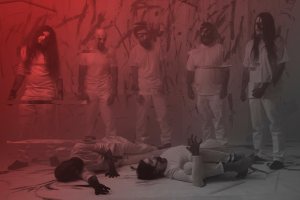 In summary, if you can’t live without your daily dosage of Funeral Doom, then this excellent album made in Romania is exactly what you need to fulfill your darkest needs. Hence, don’t forget to show your true support to the guys from Descend into Despair by following them on Facebook and on Instagram, and above all that, by purchasing Opium (which is also available in full on YouTube and on Spotify) from Funere’s Bandcamp page, or go to DistroKid for all options where you can buy or stream the album. Mixed by Indee Rehal Sagoo in London, UK, and mastered by Greg Chandler at Priory Recording Studios in Birmingham, UK, Opium will certainly please all admirers of the most introspective and funereal side of Doom Metal, leaving a scathing mark in the hearts of those who dare to venture through the album’s 59 minutes of sheer obscurity, solitude and sorrow.

Best moments of the album: dis[re]member.