Behold 31 minutes of the most solemn, majestic and uncompromising kind of Black Metal you can think of in the form of the debut album by an unrelenting horde from Italy. 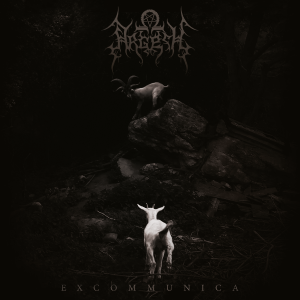 We live in a world corrupted by moral dogmas which, unconsciously, influence and create the rotten society in which we find ourselves, a vicious circle of self-destruction and self-castration. Fortunately for all of us metalheads, Varese, Italy-based Black Metal entity Argesh stands against all that, bringing forth now in 2021 their debut full-length opus entitled Excommunica, a stunning display of “Apostate Black Metal” blasted by HHG on the guitars, drums and voice reinforcements, Il Rakshasa on the guitars, and Azghal on bass and orchestrations. Recorded at Downstreet Studios, mixed and engineered by Simone Marzullo (also known as HHG) and Nicolò Paracchini (also known as Azghal), and mastered at Wavemotion Recordings by Federico Ascari, not to mention the more-than-special guests Michele Spallieri (Kenos), Lucifero Fieri (Tregenda), Vama Marga (Depths Above, Bhagavat), Chainerdog (Grendel) and Matteo Gresele (Ad Nauseam), Excommunica is a must-listen for fans of bands the likes of Behemoth, Dimmu Borgir and Deathspell Omega, bringing to our ears 31 minutes of the most solemn, majestic and uncompromising kind of Black Metal.

The opening track, titled Abiura, works as a tribal intro that will put you in a trance, with the guest vocals by Vama Marga making things even more tenebrous and flowing into the visceral Suffocate in Oxygen, a fulminating aria of extreme music where guest Michele Spallieri’s vocals are nicely complemented by the celestial voice of Lucifero Fieri, while HHG, Il Rakshasa and Azghal generate a pulverizing wall of sounds. Put differently, this is what I call a bestial display of Blackened Death Metal by such talented horde, and HHG and Il Rakshasa continue to extract sheer malignancy from their guitars in Source of Miracles accompanied by the thunderous bass by Azghal, while Michele keeps growling like a demonic entity and also featuring a kick-ass guitar solo by guest Matteo Gresele.

And HHG once again sounds infernal with his blast beats in the beyond fantastic Praelatorum Pedophilia, another austere, sulfurous creation by the trio showcasing slashing riffs and rumbling bass lines, therefore living up to the legacy of both old school and modern-day Black Metal; whereas in Apocalypse 20.7-8-9 a Cradle of Filth-inspired ambience becomes even more imposing thanks to the amazing job done by HHG on drums and all background orchestrations by Azghal. Furthermore, Michele proves once again why he was chosen to record most of the vocals for the album with his vicious roars adding an extra touch of evil to the overall result. And last but not least, closing the album we’re treated to the multi-layered, bold and Stygian tune The Elohim’s Mark, featuring guest vocals and guitar solo by Chainerdog, and reminding me of some of the best creations by Dimmu Borgir. Needless to say, HHG and Il Rakshasa are relentless with their wicked riffage, ending the album on a truly sulfurous note for our total delight. 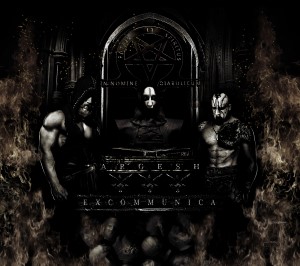 “Excommunica wants to point out how much can be spiritually self-sabotaging being born and grown in a religious context bare of awareness and consciousness. Its concept is based on disrupting these restrictions in order to find the human need to evolve and become something different from the herd, expressing the harsh hate against the hypocrisy which this moral society proves to be with its values. We’re all suffocating in this oxygen ruled by corrupted divine idols,” commented this talented Italian horde about their newborn spawn, and if you want to show them your utmost support and admiration you can start following them on Facebook and on Instagram, and of course purchase Excommunica from their own BandCamp page, letting the world we live in rot in chaos and darkness while you enjoy their undisputed Black Metal.

Best moments of the album: Praelatorum Pedophilia and Apocalypse 20.7-8-9.