One of the world’s most well-known and notorious Black Metal bands is finally unleashing upon us their infernal seventh full-length opus. 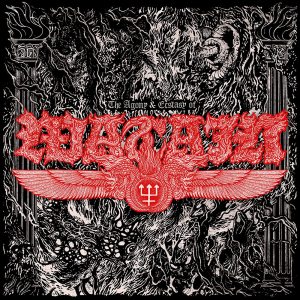 Crawled out of Satan’s cunt in 1998 and has since then ascended and grown into one of the world’s most well-known and notorious Black Metal bands, Uppsala/Stockholm, Sweden-based horde Watain returns from the underworld with their greatly anticipated seventh studio album, entitled The Agony & Ecstasy of Watain. Continuing to arouse and electrify their audience with an unmistakable, adventurous brand of Black Metal Magic processed and distilled over the course of a 25-year long history, vocalist E. Danielsson and guitarist P. Forsberg, together with session musicians H. Eriksson on the guitar, A. Lillo on bass and E. Forcas on drums, show no mercy for our souls throughout the 50 minutes of insanity found in their new album. Recorded live inside an old church on the Swedish countryside, produced by T. Stjerna at Necromorbus Studio, and displaying a sick artwork by the band’s own vocalist E. Danielsson in collaboration with Indonesian artist Oik Wasfuk, The Agony & Ecstasy of Watain takes the listener one step closer to the innermost heart of a band that despite always being surrounded by rumors and controversy has always strived for the most sincere and genuine ways of expression.

The visceral riffs by P. Forsberg and H. Eriksson will cut your skin deep in the fulminating opening track Ecstasies in Night Infinite, a brutal, old school Swedish Black Metal aria for our vulgar delectation, not to mention how infernal E. Forcas sounds on drums; whereas E. Danielsson growls and gnarls like a true servant of Satan in The Howling, with his bandmates blasting more of their demolishing Black Metal. Serimosa, a word or name of power communicated out of unknown origin which tells of the electric notion of the coming of a great power, is even darker, heavier and more atmospheric, or in other words, a different but amazing side of the band led by the demonic vociferations by E. Danielsson, followed by Black Cunt, which as you can see carries a Stygian name for another round of the band’s Mephistophelian Black Metal where P. Forsberg and H. Eriksson take the lead with their sulfurous riffs and solos. And back to their most demented mode the band offers us all the blackened chant Leper’s Grace, showcasing absolutely hellish guitar lines accompanied by the blast beast by E. Forcas and the massive bass punches by A. Lillo.

The cryptic instrumental interlude Not Sun Nor Man Nor God sets the stage for Watain to kill again in Before the Cataclysm, utterly violent and obscure from the very first second, with E. Danielsson roaring nonstop with tons of anger and hatred in his damned heart, therefore living up to the legacy of classic Swedish Black Metal. Then featuring guest vocalist Farida Lemouchi (Molasses, The Devil’s Blood) and guest guitarist Gottfrid Åhman (Invidious, In Solitude) we’re treated to We Remain, and Farida will crush your corrupted, doomed heart with her enfolding vocals while the band blends the most obscure elements of Black and Doom Metal, resulting in a stunning hymn to darkness. Get ready to be pulverized by those Swedish devils in Funeral Winter, where E. Forcas is on fire behind his drums dictating the song’s pace while his bandmates extract pure evil from their sonic weapons, and before Watain crawls back into the shadows they offer our avid ears the old school Septentrion, with the band’s guitar duo slashing our minds with their wicked riffage.

You can experience the same agony and ecstasy of such important band from the global Black Metal scene by following them on Facebook and on Instagram, by subscribing to their YouTube channel, by streaming more of their infernal creations on Spotify, and above all that, by purchasing the excellent The Agony & Ecstasy of Watain by clicking HERE or HERE. Characterized by a twisted beauty and primal ecstatic force, Watain are the wolf that keeps on hunting, fearless and free, in the dark night of man, with their new album depicting that hunt to perfection thanks to its endless heaviness, obscurity, rage and hatred, all elements that have made our beloved Black Metal so powerful and compelling through the years, while the band keeps always exploring the winding depths of both mind and spirit with a new sense of clarity and determination.

Best moments of the album: Ecstasies in Night Infinite, Serimosa, Leper’s Grace and We Remain.