Behold this beautiful album of doom made in Brazil, leading us to reflect on the fragility of human existence when facing the challenges of life on planet earth. 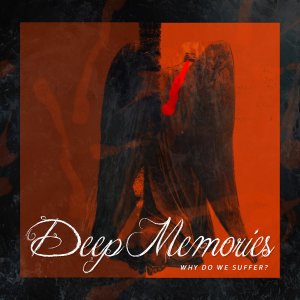 Having consolidated itself as one of the main names from the Brazilian Melodic Doom/Death Metal scene due to its heaviness, originality and melodic complexity, Americana, São Paulo-based one-man act Deep Memories has just unleashed the project’s sophomore full-length album Why Do We Suffer?, following up on their 2018 release Rebuilding the Future. The brainchild of vocalist, multi-instrumentalist and producer Douglas Martins, Deep Memories has been on a constant and healthy evolution since its inception in 2016, with Why Do We Suffer? perfectly depicting the professionalism and hard work by Douglas throughout its 41 intense minutes of music. Produced, recorded, mixed and mastered by Douglas himself at AJM Studio, and displaying a stylish artwork by Iranian graphic artist Agreen Paymazd (together with Douglas) illustrating the emotional charge generated by human suffering, the album deals with a high degree of introspection, leading us to reflect on the fragility of human existence when facing the challenges of life on planet earth.

The doomed guitar lines by Douglas kick off the opening track Enslaved by Reciprocity Obligation, with its atmosphere growing in intensity and darkening the skies as time passes by, being therefore tailored for admirers of the music by Paradise Lost and My Dying Bride. Moreover, Douglas’ deep guttural vocals add a devilish touch of melancholy to the overall result, whereas in Please, Do Not Close the Coffin! we face another round of his obscure fusion of Doom and Death Metal, showcasing sluggish beats and sharp riffs while also bringing to our ears an interesting paradox between his harsh roars and very melodic guitars. And Douglas’ piercing guitar lines keep screaming inside our minds in Get Away From Poison, offering us all over seven minutes of classic Doom Metal with a strong Insomnium vibe, sounding very cohesive from start to finish. Needless to say, it’s quite impressive that only one man was responsible for such dense and complex sonority.

Uncontrolled Cells Multiplication is one of the most introspective and melancholic of all songs, which is also reflected in both the anguished gnarls and clean vocals by Douglas, consequently living up to the legacy of old school doom; followed by the title-track Why Do We Suffer?, beginning in a very atmospheric way with minimalist, ethereal sounds permeating the air until Douglas attacks with his acoustic guitar and clean vocals. Prerogatives or Exceptions also starts in a pensive manner, with the hellish growls by Douglas invading our senses while he keeps the music as lugubrious as possible through his beats and fills, being perfect for lovers of the more contemporary creations by Paradise Lost, flowing into A Rocket to Homeland, a simple but effective outro guided by the piano notes by Douglas. I would love to see it evolving into a more complete song, but it’s nothing to worry about as it’s still very enjoyable in the end.

After all is said and done, you’ll quickly realize Douglas Martins is more than just an extremely talented musician. He clearly put all his heart and soul into the making of  Why Do We Suffer?, showcasing all his passion for the dark and doomed, and the final result will please anyone who’s also addicted to this gloomier side of music. Having said that, you can provide Douglas with all your support and admiration by purchasing his imposing new album from his own BandCamp page or webstore, by streaming the album in full on on YouTube and on Spotify, or simply by clicking HERE for all places where you can buy or stream it, and don’t forget to also follow Douglas and his Deep Memories on Facebook and on Instagram, staying up to date with all things Deep Memories. Why do we all suffer so much in our lives? Perhaps you’ll be able to find the answer to such difficult question while listening to the new album by Deep Memories, and even if you can’t answer that at least you’ll certainly have a very good time listening to the first-class doom blasted by this lone wolf from Brazil.

Best moments of the album: Please, Do Not Close the Coffin!, Get Away From Poison and Prerogatives or Exceptions.

Worst moments of the album: A Rocket to Homeland.