Representing an exploration beyond the sane and mentally sound, this talented Swedish horde is ready to haunt our souls with seven unrelenting tracks of atmospheric and sinister Black Metal. 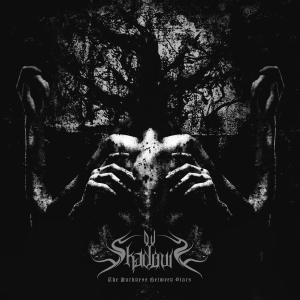 “Embrace your shadow self – your dark aspects. Don’t hide away. Let those harmless creatures, turn into raging monsters. Let chaos guide your consciousness. You are ov Shadows.”

Those few sentences frame the concept behind Swedish Black Metal horde Ov Shadows, representing an exploration beyond the sane and mentally sound. With their music and lyrics, Ov Shadows acknowledge the duality that divide a persona and the shadow self, continuing further into the dark, a portal into chaos without barriers and rules. And after crossing that portal, you’ll be ready to explore the sinister realms of Atmospheric Black Metal ruled by Ov Shadows in their brand new album, entitled The Darkness Between Stars.

Formed in the city of Gothenburg in 2016, the band comprised of RA (aka Ronny Attergran) on vocals and bass, AF (aka Andreas Frizell) and AA (aka Anders Ahlbäck) on the guitars, and JW (aka Jonas Wickstrand) on drums returns after their 2016 debut EP Monologues with more of their Stygian sound, delivering epic riffs that turn from mournful to triumphant in a way that is stirring and emotionally satisfying. In other words, The Darkness Between Stars has everything that one could possibly want out of a Black Metal album, those being a truly dark atmosphere, an epic feel, the right mix of melody and grimness, and an engaging song structure.

Ominous sounds emerge from the dark chambers of hell until the quartet begins their devilish mass in the title-track The Darkness Between Stars, blasting sheer brutality and blasphemy during its almost 7 minutes of music.  RA sounds like a possessed demon on vocals, while JW delivers the most classic form of blast beats, generating a straightforward musicality recommended for admirers of the genre. In Bellowing Shadows, darkness and rage keep flowing from the band’s instruments in an excellent display of Black Metal, with their evil guitar duo AF and AA cutting our skin with their old school riffage, whereas RA’s gnarls sound and feel even more disturbing. And displaying hints of Doom Metal and Blackened Doom (but still reeking of putrid Black Metal) we have The Hanged Man, where JW continues his pulverizing path while both guitars sound as sulfurous as they can be, all spiced up by a sinister atmospheric passage before all hell breaks loose again.

The acid Disguised As Altruism is another demolishing Black Metal feast by Ov Shadows, with its guitars getting more and more scorching as the music progresses while the overall malignancy is considerably boosted by JW’s unstoppable beats, living up to the legacy of Scandinavian Black Metal. The Ritual of the Natural Flame already begins in full force, with the four members of the band summoning total darkness with their Stygian instruments, in special RA and his high-pitched demonic roars (not to mention the song’s somber and absolutely menacing break). After such beautiful blast of Black Metal, strident riffs and gnarls set the tone in the dense metallic extravaganza named Hordes Abiding the Narrator, with all instruments generating a mesmerizing dark ambience perfect for RA and his vociferations. Lastly, their final onrush of blasphemy and obscurity comes in the form of a 7-minute devastating tune named A Sky In Vain, where AF and AA create a wall of darkness with their riffs while JW switches between classic Black Metal drumming and Doom Metal-inspired beats, flowing into a melancholic and obscure ending.

If you want to take a detailed listen at The Darkness Between Stars, click HERE and enjoy this very cohesive and professional album in its entirety. Also, in order to show your true support to this skillful Swedish horde, simply visit their Facebook page for news, tour dates and other nice-to-know details about the band, and their YouTube channel for more of their unrelenting Black Metal. And of course, purchase The Darkness Between Stars on BandCamp or on Big Cartel, letting the somber music by Ov Shadows penetrate deep inside your mind, blackening your thoughts until there’s no way back.

Best moments of the album: Disguised As Altruism and The Ritual of the Natural Flame.