This talented Ukrainian entity returns after four long years with a much darker and rawer sound, bringing to our ears first-class European Death and Doom Metal.

Formed in 2014 as a Gothic-doom duo by vocalist and multi-instrumentalist Evgeniy Shamarin in Kharkiv, a city in northeast Ukraine which is considered the Black Metal capital of the country, Death/Doom Metal unity Mettadone are ready to crush with a brand new lineup and musical direction in their sophomore album Rotten Flattery, highly recommended for fans of bands with a classic 90’s European sound such as Hypocrisy, Edge of Sanity and Paradise Lost. Comprised of the aforementioned Evgeniy on vocals and lead guitar, Sergey Baskakov also on the guitar, Alexander Chernyakhovsky on bass and Alexey Silenko on drums, Mettadone decided to venture through much darker and devilish lands in Rotten Flattery than what we were able to witness in their debut album Invisible Disease, mainly thanks to Evgeniy moving from drums to vocals and guitar when their previous vocalist left the band, switching from their My Dying Bride-inspired sonority to a much rawer approach, consequently sounding closer to other amazing underground acts like Warcrab, Moss Upon The Skull, Refusal and their countrymen 1914.

The quartet begins hammering their instruments mercilessly in the opening track Mind’s Prisoner, showcasing a well-balanced fusion of classic Death Metal and old school Doom Metal (and even Blackened Doom), with Evgeniy growling like a demon while Alexey crushes his drums in great fashion; whereas in Obscurity of Hypocrisy they keep blasting hatred and rage in the form of extreme music, with the band’s guitar duo Evgeniy and Sergey being on absolute fire, adding a welcome touch of evil to the music with their raw, razor-edged riffs. Then Alexander and Alexey extract pure metallic and utterly menacing sounds form their respective instruments in Untrue Entity, generating a thunderous atmosphere perfect for Evgeniy’s demented roars, resulting in six minutes of darkened sounds perfect for banging your head like there’s no tomorrow. And in Pray for Help we’re treated to a more ferocious version of classic Sludge and Doom Metal, with symphonic elements bringing epicness and melancholy to the overall musicality. Furthermore, it’s a pleasure to listen to Alexey on drums, as he can be at the same time infernal and very technical, never letting the music get stale or tiresome. 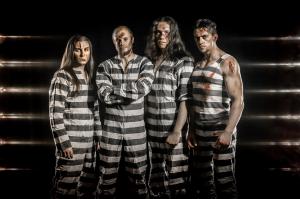 Living up to the legacy of underground Doom Metal, the quartet delivers the Stygian tune On the Verge, showcasing a beautiful work done by Evgeniy, Sergey and Alexander with their stringed weapons, and also presenting some clean vocals and crisp guitar solos as “bonuses” for our avid ears. In a Funeral Home showcases creepy piano notes intertwined with cutting riffs and pounding drums in what’s the darkest of all songs of the album with its seven minutes of demonic sounds and a strong feeling of hopelessness, just the way we like it in old school doom, also sounding very progressive and intricate from start to finish. Act of Revenge is another song tailored for ripping your spinal chord headbanging where Evgeniy’s growls get deeper and deeper as the music progresses, with the band’s guitarists being in absolute sync, therefore delivering flammable riffs from their axes while Alexey dictates the rhythm with his hellish beats. The last track from the regular version of the album, entitled Orphan, will pierce your ears and minds with its classic Doom Metal sonority infused with Death Metal nuances, and you better be ready because the quartet won’t stop hitting you hard with their vicious music, with the song’s ending being an interesting mix of the Death Metal by Unleashed with the obscure music by Paradise Lost. And lastly, Mettadone offer us more of their dark and visceral music in the bonus track He’ll Not Be Alive, where Evgeniy keeps gnarling demonically while his bandmates fire insanity and violence from their instruments, with the strident sound of guitars being simply fantastic and extremely enjoyable.

After listening to Rotten Flattery, I’m more than sure this new version of Mettadone is here to stay, providing fans of obscure doom and death everything they can ask for in underground extreme music. Hence, don’t forget to give Mettadone a shout on Facebook and on VKontakte, to subscribe to their YouTube channel for more of their visceral music, and obviously to purchase a copy of Rotten Flattery from the Archaic Sound’s BandCamp page or from Discogs. After all is said and done, although Kharkiv might be considered the Black Metal capital of Ukraine, let’s say that the city also has its share of first-class Death and Doom Metal to offer us fans, thanks to the great job done by Mettadone in their brand new opus and hopefully in many more to come in their promising career.

Best moments of the album: Obscurity of Hypocrisy, Pray for Help and Act of Revenge.