Let’s join Maria and the boys into the battlefield to the sound of their newborn opus, encompassing less known historical facts about the most destructive war in world’s history.

Founded in 2006 in Sofia, Bulgaria and led by frontwoman Maria “Dièse” Doychinova, the unstoppable Heavy Metal war machine that goes by the name of Rampart returns to the battlefront with their fifth full-length installment, entitled WWII: Memories For The Future, featuring 11 tracks full of energy, epicness, speed and violence. Produced by Maria Dièse herself, mastered by Michael “Miro” Rodenberg at Gate Studio, displaying a classic artwork by Stefan Valkanov, and featuring Rock Thrashler (aka Svetoslav Slaveykov) as a World War II and sound consultant and Valdemar (aka Vladimir Ivanov) as a guest bassist in four songs, WWII: Memories For The Future is a concept album that encompasses less known historical facts about the most destructive war in world’s history, all wrapped up by the straightforward, ass-kicking metal music brought forth by the aforementioned Maria together with guitarists Yavor Despotov and Sebastian Agini, bassist Svilen Ivanov and drummer Stefan Mijalković.

The guitars by Yavor and Sebastian ignite the opening tune June 22nd, inspired by Operation Barbarossa, the German invasion of the Soviet Union which started on Sunday June 22, 1941, with Maria delivering an epic vocal performance; whereas investing in a more melodic and thrashier sound, the quintet blasts the solid Napalm Stars, with Stefan dictating the song’s galloping pace accompanied by the rumbling bass by Svilen, showcasing interesting breaks and variations as well as elements from Progressive Metal. In Entropy Of Mind the band once again unites Heavy Metal with Hard Rock and Thrash Metal, resulting in a headbanging massacre spearheaded by the vicious beats by Stefan while Maria keeps stunning us all with her vocal lines; and drinking from the fountain of NWOBHM, the band delivers an Iron Maiden-inspired extravaganza titled Twice Occupied, with Yavor and Sebastian stealing the spotlight with their sharp riffs and solos, followed by Luftraum, switching gears to a more modern sonority, more inclined to Thrash Metal than Heavy Metal where Maria sounds infuriated on vocals.

Back to a more traditional musicality, it’s time to go all the way to the 80’s to the sound of Stormtalkers, where Maria is effectively supported by her bandmates’ backing vocals while the band’s guitar duo once again slashes their stringed axes nonstop. Valdemar makes sure the earth tremble to the sound of his bass in the fast and direct Power Metal tune Wolfsrudel, keeping the album at a high level of adrenaline; while a Megadeth-like atmosphere will embrace your soul in Overcast Omen, with Maria and the boys bringing forward more of their old school metal music, and with Valdemar being once again on fire with his bass jabs. Then we have Harleys In Berlin, a tribute to all things metal by Rampart where the riffage by Yavor and Sebastian will pierce your ears in great fashion, while Maria declaims the song’s fresh and vibrant lyrics. Not only that, Yavor is also brilliant with his classy piano notes; whereas razor-edged riffs and solos are the main ingredients in the upbeat metal feast titled Black Sun, with Maria kicking some ass on vocals while Stefan doesn’t let the energy go down with his rhythmic beats and fills. Lastly, closing the album it’s time for another fast-paced, metallic creation entitled Now We Are One, again showcasing the band’s talent and passion for heavy music.

Maria and the boys are waiting for you to join their metallic army on Facebook, especially if you’re a fan of bands such as Helloween, Doro, Battle Beast and Burning Witches, and if you want to give WWII: Memories For The Future a try you can enjoy it in full on YouTube and on Spotify. In addition, don’t forget to show your utmost support to Rampart by purchasing their new opus from the Sleaszy Rider Records’ BandCamp page or webstore as a regular CD or as a CD + DVD combo including their live performance at Wacken Open Air in 2017 plus a couple of interviews and official videos, as well as from Apple Music or from Amazon. When heavy music and World War II are put together the final result is usually above average, but in the case of Rampart they more than nailed it with their new album, pointing to an even brighter future ahead of those Bulgarian warriors.

Best moments of the album: Entropy Of Mind, Harleys In Berlin and Black Sun.

Worst moments of the album: Luftraum.

Guest musicians
Valdemar – bass on “Luftraum”, “Wolfsrudel”, “Overcast Omen” and “Now We Are One”

Over 55 minutes of classy and modern rock music showcasing a different side of this talented Russian band, but still keeping their amazing core Alternative Rock and Metal intact.

Offering over 55 minutes of modern and melodic Alternative Metal with several distinct rock elements, Ambition 999, the ninth album in the career of Saint Petersburg, Russia-based act Grenouer, turned out to be a long-term project due to all the re-recording needed until the band reached its desired sound. That resulted into one of the biggest gaps between albums in their career, with nothing more, nothing less than four years separating Ambition 999 from their previous album, Unwanted Today, released in 2015. However, all that wait was definitely worth it as their new album is indeed a fresh addition to their discography, with each one of its 15 songs offering a different approach when compared to the band’s two previous efforts in terms of riff intensity and rapid-fire solos, balancing between new and clichés, double density and marked vocal temperament.

Engineered and recorded by Al Bolo at RDS& Moscow Gates Apartment Studios, Anssi Kippo at Astia-Studio, and Luigi Del Missier at BlackMirror Studios, produced, mixed and mastered by Giuseppe “Dualized” Bassi from dysFUNCTION Productions, and featuring a futuristic artwork by Brazilian artist Jobert Mello (Sledgehammer Graphix) and Italian artist Zimon (New Breed Graphic Studio), Ambition 999 feels like a heavier version of bands such as Depeche Mode and Duran Duran, presenting a more than inspired and electrified band comprised of Andrey Ind on lead vocals, Dmitry Rubanovsky and Alexander Motor on the guitars, Al Bolo on bass and Danny D on drums, and bringing to our avid ears everything we need to have a good time on the road, at a pub, at home, or anywhere else where good rock music is properly appreciated.

Electric waves permeate the air before the band begins blasting their modernized blend of Alternative Rock and Metal in Burnt to the Ground, with highlights to the slashing guitar riffs and solos by Dmitry and Alexander; followed by Nevermind Tomorrow, a song perfect for banging our heads to their riffs and beats while Andrey gives life to its party-like lyrics (“Fast and tight / High heel party night / Tomorrow never knows and never dies / Drinks on me / Any chicks for free? / We’re born to make some noise, so sing with me / Or you’d better shout”), and One Day, another thrilling tune in the same vein as bands like Godsmack, Shinedown and Three Days Grace, sounding very melodic and showcasing a passionate performance by Andrey on vocals while Danny D dictates the rhythm with his spot-on beats. Then in Infinite Grace the band adds a good amount of heaviness to their music, getting closer to the musicality by bands like Rob Zombie and Marilyn Manson but still keeping their core Alternative Rock intact, also presenting some sick guitar solos for our total delectation, whereas in Medicine Treats No Lies the quintet continues their feast of modern-day rock and metal music, with Al together with Danny D bringing thunder to the music with their respective instruments. 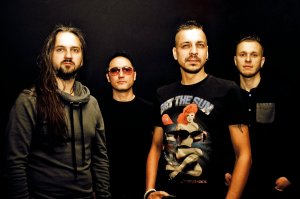 If Cure for the Lonely is even more futuristic and atmospheric, displaying a strong focus on Andrey’s vocals and feeling at times like a hybrid of modern rock music with the electronic and alternative sounds by old school bands like Depeche Mode, Uncommon Faith is a good song for hitting the highway, presenting great sync between the band’s stringed trio and Danny D’s beats, all infused with Hard Rock elements. On the other hand, Back on Track is slightly below the rest of the album in terms of electricity, albeit it does bring forward a considerable amount of progressiveness as well as Andrey’s smooth but potent vocals; while Universe of My Heaven sounds very modern and progressive, also bringing some symphonic elements in the background to give it an extra taste. Moreover, Al’s bass sounds as groovy as it can be, while Danny D pounds his drums just the way we like it in good modern Rock N’ Roll. After that, it’s time for Grenouer to take their musicality to even more eccentric lands with the weird, atmospheric and fun Crimson Lines, with highlights to its classy, poetic lyrics (“Read between the crimson lines / Sacred destination / Go behind the scenes of life / Steady irritation / Read between the crimson lines / Go behind the sonic nightmares / Black and white visions in the sky”).

It’s interesting how Grenouer manage to keep their essence while exploring new sounds, which is the case in the almost electronic-dancing tune Chase the Sun, and although the final result is quite entertaining the guitars by both Dmitry and Alexander needed an extra kick for the whole song to work even better. Then melancholic, acoustic guitars ignite the introspective Ingenious Care, showcasing smooth vocal lines, complex and serene drums, and featuring guests Chayka Chursina on vocals and Zimon on bass, sounding dark from start to finish and, therefore, sending the desired message by the band. Dangerous Girls takes the band back to a heavier, more pounding sonority, with their guitar duo being on fire as well as Al and his rumbling bass, or in other words, this is a well-balanced hybrid of Progressive and Alternative Metal for admirers of the genre. The second to last blast of Grenouer’s rockin’ sounds comes in the form of Paranormal Star, sounding as whimsical and piercing as its name, placing it as another serious candidate to be part of their live setlists, whereas the last tune from Ambition 999 is a superb acoustic ballad entitled Alone in the Dark, which not only presents beautiful guitars and vocals, but its official video is amazingly obscure and captivating. Put differently, it might not be the usual electrified Grenouer we’re used to, but this somber, pensive side of the band is just as enfolding as their more regular sonority.

What are you waiting for to put your hands on 15 extremely well-crafted and energizing rock songs made in Russia? Simply go to the band’s official BandCamp page to grab your copy of the album, as well as to the Sleaszy Rider Records’ BandCamp or webstore, to iTunes or to Amazon, and keep an eye on their Facebook page, VKontakte and YouTube channel for news, tour dates and more of their crisp rock music. As an already established and successful band in the world of heavy music, we can rest assured Grenouer are far from calling it quits, hoping that all of their future releases are just as good as the music found in Ambition 999 and that they proudly keep carrying the flag of Rock N’ Roll wherever they go.

Best moments of the album: Nevermind Tomorrow, Medicine Treats No Lies, Crimson Lines and Alone in the Dark.

Worst moments of the album: Back on Track and Chase the Sun.