Telling the story of the most important forbidden grimoires in European history, this unrelenting Spanish horde delivers an excellent album that lives up to the legacy of 90’s Black Metal. 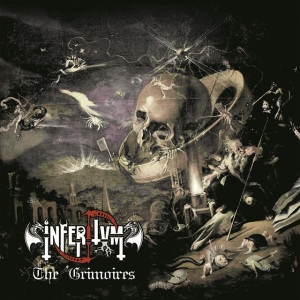 Born in 2014 in Palma de Mallorca, a resort city located in the Balearic Islands in Spain, with the task of putting the Black Metal genre back in the shadow of the glory it had in the 90’s, following the label from the most infamous bands from that period as a pure conceptual beginning (but excluding arsoning or murders, of course), the unstoppable horde that goes by the name of Inferitvm has just released their sophomore album The Grimoires, an epic story about black magic, esoteric rituals and all the different ingredients of true classical Black Metal. Having said that, do you accept the challenge of deciphering the forbidden texts that Inferitvm have brought back to life?

Comprised of lead singer and guitarist Sorcerer V., guitarist Lord Insekkton, bassist Aghanazzar and drummer Bârg, the sound of Inferitvm is fast, raw and full of details and reminiscences, with bands like Emperor and Immortal, as well as several other renowned groups from Norway, Sweden and Finland, serving as the main inspiration for their music. Telling the story of the most important forbidden grimoires in European history, delving into the miseries and stories behind them, The Grimoires is a manual for unraveling all the mysteries of black magic, with a symphonic twist that will undoubtedly surprise all who enjoy devilish and extreme music. Furthermore, the album brings some orchestral variations which end up helping to introduce your mind into the concept and imagery of an album that’s definitely “not for children”, with its lyrics being based on ancient spells and rituals of esoteric origin, and with the majority of recital refrains expressing the prayers and rituals in a solemn and profound way.

Phantasmagorical keys generate a menacing ambience in the intro Trithemius, before Inferitvm comes ripping with the sonic onrush titled Codex Gigas, where Sorcerer V. gnarls and vociferates like a demon to the imposing beast by Bârg. Moreover, Sorcerer v. and Lord Insekkton bring tons of melody to the musicality with their strings, flirting with contemporary Melodic Black Metal but still sounding loyal to the foundations of classic Black Metal. Then their devastation goes on in the sulfurous and pulverizing Clavicula Salomonis, a lecture in Black Metal bringing forward the most malevolent elements of the genre spearheaded by Sorcerer V.’s infernal roars; and there’s no time to breathe as the quartet keeps blasting sheer obscurity through their damned instruments in Malleus Maleficarum, with Sorcerer V. and Lord Insekkton being on fire with their riffs and solos throughout this marching mass of absolute evil. 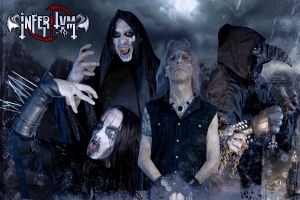 In Goetia of Shadows, Bârg and Aghanazzar keep smashing their instruments nonstop, generating a reverberating sound that will please all fans of the genre, all balanced by some very harmonious guitar lines and hellish growls, whereas Galdabrök is another hammering, disturbing hymn of darkness by Inferitvm, with Bârg and his pounding drums dictating the rhythm while Sorcerer V. grasps the song’s obscure lyrics poetically and darkly. In Liber Lux Tenebris, the scorching hot guitars by Sorcerer V. and Lord Insekkton add a touch of Doom Metal to their already infernal music before all hell breaks loose in another feast of old school Black Metal perfect for banging your head in the name of evil. And De Occulta Philosophia is probably one of the most disturbing songs of the whole album (if not the most), where all band members make sure they extract the most Stygian sounds form their instruments, in special the band’s infernal guitar duo with their classic riffage, ending in the most unsettling way possible.

Fortunately for all fans of extreme music, the last batch of songs from The Grimoires is just as thrilling and vile as the rest of the album, starting with La Poule Noire, presenting a classic Scandinavian Black Metal sound with the band’s own twist, sounding as violent as it can be, with its guitar solos creating an interesting paradox with the blast beats delivered by Bârg; followed by De Praestigiis Daemonum, a truly infernal aria where Inferitvm crush our minds mercilessly with their brutality, darkness and rage, or in other words, a demolishing Black Metal tune with a few breaks and variations added to bring more taste and punch to the overall result. And last but not least, the cryptic vocalizations by Sorcerer V. ignite the closing tune titled De Umbrarum Regni, spiced up with nuances of Doom Metal and Blackened Doom, remaining creepy and atmospheric until its visceral ending.

In a nutshell, this unstoppable Spanish horde more than succeeds in telling stories of black magic and evil spells in the form of the pulverizing Black Metal found in The Grimoires (available for a full listen on Spotify), and in order to show your true support to those four horsemen of old school Black Metal simply follow them on Facebook, and grab your copy of such distinct album from their BandCamp page, from the Inverse Records webstore, from iTunes or from Amazon. Because, in the end, all you have to do is let the ancient spells and malignancy flowing from the music by Inferitvm consume your soul, keeping the flame of 90’s Black Metal burning bright for decades to come.