Judas Avenger is rising faster than a bullet, to kill with power and play Heavy Metal louder than hell. 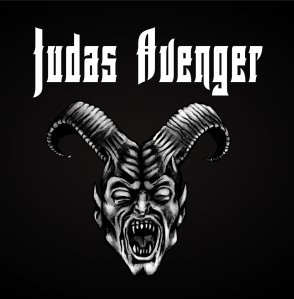 Forged in the cold fires of Finland from the alliance of the bands Dark Avenger (tribute to Manowar) and Judas Rising (tribute to Judas Priest), Finnish Heavy/Power Metal warriors Judas Avenger do not aim at revolutionizing heavy music, but keeping the flame of true Heavy Metal burning bright through the years. In other words, don’t expect to find the next step in the evolution of music when you take a listen at their self-titled debut EP, Judas Avenger, but instead a solid and entertaining tribute to the golden years of heavy music with the addition of the band’s own talent, passion, energy and determination. As cheesy as this might sound, the band’s loyalty to the purest form of Heavy Metal is what makes their music so exciting and, consequently, worth listening.

And although the main influences of Judas Avenger are obviously the iconic Judas Priest and Manowar, this five-piece army of immortals from Finland also drinks from the metallic fountains of Savatage, Death, Iron Maiden, Megadeth and tons of other unique metal heroes, adding some extra layers of complexity to their music. Moreover, I guess I don’t need to mention the fact that, as most bands from Finland (and the whole Scandinavia), they have a titanic focus on the melody and harmony of their compositions, sounding at the same time polished and aggressive exactly as the Gods of Heavy Metal expect from any real heavy squad claiming for a place among them at the Halls of Valhalla.

If you’re not familiar with Judas Avenger yet (and I believe you’re not), you might think Manowar are back to their prime when you start listening to the opening track, the excellent Judas Avenger. However, it’s not a new Manowar tune despite Pekka Montin sounding exactly like Eric Adams during most of the song, but a mighty tribute to the Metal Warriors with its instrumental parts being slightly more inclined to what Judas Priest used to do in Defenders of the Faith and Painkiller. In addition, the band’s own touch comes in the form of the progressiveness, breaks and variations found throughout the entire song, keeping them away from being labeled as “just a cover band”. 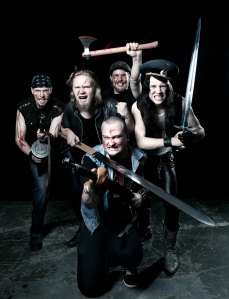 And what would happen if the classics Painkiller and Ride the Dragon were merged into one song? The result would definitely be similar to Hell Nation, where guitarists Ville Viertola and Joni Kuuri, together with bassist Tommi Lempää, go to war with their galloping riffs and bass lines, while drummer Tomi Lahtinen keeps the energy level high with his beats and fills. Pekka showcases a wide vocal range that would make both Eric Adams and Rob Halford proud, but in my opinion what really stands out in this kick-ass tune are the elements from other classic bands such as Iced Earth and Savatage that you can feel while listening to it. The following track, Empire of Dust, is probably the most original song by Judas Avenger, offering the listener catchy riffs and raspier vocals inspired by old school Hard Rock and Rock N’ Roll. This melodic tune is indeed an exciting ode to all things metal, including even some piano passages a la Joey DeMaio, not to mention that it will surely sound amazing when played to a live crowd.

It’s good to see Judas Avenger focus on the music itself rather than on long boring speeches or on endless wind and rain noises (got it?), resulting in amazing tunes such as Dying Wish, a rock ballad with a beautiful and imposing acoustic intro that gets heavier and heavier as the music evolves, and Night of the Banshee, a journey back to the 80’s when we metalheads were sitting on top of the world. And before I forget, kudos to Pekka for an outstanding performance with his high-pitched screams and to the other band members for their powerful backing vocals, especially during the song’s awesome chorus.

Divine Darkness, the last and the longest of all tracks, is also their most progressive and obscure chant, with its harsher vocals enhanced by a violent atmosphere and displaying clear influences from Savatage, Dream Theater and even Death Metal, increasing the song’s electricity until it fades to a melancholic ending. Thus, the guitar solos by Ville and Joni make me wonder how much those guys love guitar heroes such as Chuck Schuldiner, Glenn Tipton and Alex Skolnick. If you also want to have an answer for that or simply know more about Judas Avenger, you can contact them through their Facebook page, listen to their music at their SoundCloud page, and evidently buy their EP at their BandCamp page. Because in the end we all know that the Gods made Heavy Metal, and they saw that it was good. They said to play it louder than hell, and Judas Avenger promised that they would.

Best moments of the album: Judas Avenger and Empire of Dust.

Worst moments of the album: The Mighty Thor said there are no bad moments in this EP.