Do you love elaborate music, but at the same time do you feel an urge to bang your head nonstop? This skillful German act might have exactly what you’re looking for. 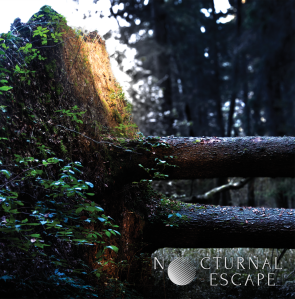 If you’re one of those demanding metalheads who’s always looking for fresh and complex music, which at the same time still offers a raw vibe or an evil aura that keeps the music as underground as possible the likes of Moonsorrow, Enslaved, Opeth and Amorphis, you’ll have a great time banging your head to Nocturnal Escape, the self-titled debut album by German Progressive Death/Black Metal band Nocturnal Escape.  It might not be an easy listen for people who are used to more straightforward rock and metal at first, but the quality of the music found in this album is so good you’ll end up succumbing to the band’s intricate darkness after a short while.

As a matter of fact, this Augsburg-based group is more like a project created by multi-instrumentalist Leo Bergmann in January 2014, a few months after his previous band, Bleak, disbanded in 2013. Leo was joined by his brother, bassist Klaus Bergmann (who also plays for the excellent German Death Metal band Disgusting Perversion), in late 2014, and also by vocalist Thomas Zimmermann, who added clean vocals to the album in 2015. I don’t know if they can be called a “power trio”, but they surely know how to make a lot of noise and how to fill every empty space with their notes, riffs and beats.

A demonic voice introduces us to the music by Nocturnal Escape in War Of Beliefs, a blend of Death and Black Metal so technical and obscure it’s not recommended for the faint-hearted. However, amidst all turbulence there’s room for tons of progressiveness and melody, with kudos to Leo for crafting such solid and entertaining musicality. What starts as an epic battle hymn evolves to boisterous Black Metal in Age Of Atrocity, with highlights to the nonstop riffs by Leo, the good balance between harsh and clean vocals thanks to a great job done by Thomas, and its meaningful lyrics (“Don’t follow leaders for whom you are lifestock / Pull out now to prevent the shellshock / Cluelessness is bliss of the mindless herd / Set yourself aside and feast on your hate”). Besides, although it’s less progressive than the opening track, it still presents intricate passages and lots of tempo changes.

A Lucid Mind, which leans towards cleaner Progressive Metal despite the growling vocals by Leo, offers us calm and relaxing passages focusing on Thomas’ clean voice and an embracing atmosphere to soothe our souls, while the other pieces of the song are an ode to madness and freedom; followed by Disillusion Strikes, where the band gets back to a more direct sounding, a modern Death Metal tune with hints of the craziness generated by bands such as Devin Townsend, turning it into one of the top moments of the album. The title-track, Nocturnal Escape, starts in some kind of “cosmic” way due to its synths, before switching to Progressive Metal enhanced by Leo’s devilish growls while Thomas declaims his vocal lines, developing then an interesting storyline to be followed attentively throughout the entire song as you can see in its lyrics (“The pain feels good the pain feels right / This cleansing torture drives me through the night / I follow this path and come to me / With this aquired taste in human tragedy”). A similar situation is found in Screaming Heart, with yet another melancholic intro that grows in sorrow and darkness until it becomes a Progressive Dark/Doom Metal exhibit. Not only it feels like two or three songs in one, but the strong focus on riffs and solos were clearly done on purpose by Leo to enhance the song’s punch.

What initially seems to flirt with Alternative Rock and modern Hard Rock turns into a Black Metal feast with a desperate ambience that will invade your mind in Gaia’s Demise, with its funereal riff and the well-balanced duo of harsh and clean vocals leading this progressive tune through its acoustic passages and mesmerizing rhythm. And what if Deep Purple, Devin Townsend and Arch Enemy got together for a jam session? The result would probably resemble the thrilling tune entitled Call To Humanity, which keeps rolling at full speed fueled by its awe-inspiring guitar riffs and solos. It’s indeed an amazing mix of Speed and Death Metal with huge dosages of progressiveness and feeling to close the album on a high note, and in my humble opinion it’s the best tune of the album by far. In addition, pay close attention to the song’s special guests Paul Perlberg, Joscha Radaj (Zerfetzer, Musikalischer Gesundheitsdienst), Tobias Ruf (Disgusting Perversion), Julian Gruber (Running Death) and Simon Bihlmayer (Running Death), as they add some crazy amount of wickedness to the final result.

You can get more details on Nocturnal Escape at their official Facebook page, as well as purchase their debut album through BandCamp. This is a great opportunity for fans of progressive and aggressive music to witness the inception and rise of a talented metal act from Germany who are not afraid of experimenting and adding different layers of complexity to their compositions, creating a unique sounding that, as aforementioned, will beautifully reach to your heart and definitely make you bang your metal head.

Best moments of the album: Age Of Atrocity, Disillusion Strikes and Call To Humanity.