If you’re eagerly looking for truly independent music in the world of Heavy Metal, this idiosyncratic Polish project will satisfy your craving with their fresh and unorthodox experimentations. 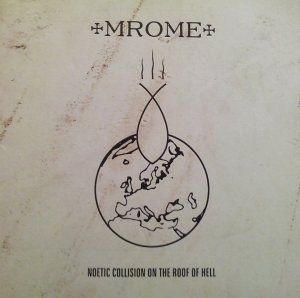 The last review of the year is the epitome of independent metal, something we at The Headbanging Moose truly love to support, being absolutely raw, anti-mainstream, not interested in promoting band members and not interested in touring at all. Founded in the now far, far away year of 1995 by a group of teenage friends in the city of Andrychów, located in Southern Poland,  Death/Black Metal project +MROME+ was reborn in 2009 after almost a decade of silence, finally releasing as a duo now in 2016 the idiosyncratic album Noetic Collision on the Roof of Hell.

+MROME+ produce their music in their own primitive studio in complete isolation from the local scene, with their only principle being that every new recording is a new start for the band, a new stage, keeping things as different and interesting as possible, and they do that by not labeling their music nor sticking to a predetermined formula. If you take a listen at their collection of demos from 1997 to 1999 baptized as The Basement Sophisma, you’ll see how versatile +MROME+ are, ranging from devilish extreme music to unique cover version for non-metal classics such as Faith No More’s “The Gentle Art of Making Enemies”, and in Noetic Collision on the Roof of Hell the band continues with their heavy experimentations, always pushing their creative boundaries further and further.

When the opening track Colors begins, you’ll be facing a crossover of Death, Sludge and Progressive Metal, with its bass lines rumbling in your face, while Key V transpires aggressiveness through his harsh vocals and P provides the right amount of heaviness and intricacy behind his drums. Then +MROME+ turn up the heat and blast a dark and vile Death Metal composition titled Crush the Moon, sounding amazingly underground and powerful. It has an old school punch thanks to its catchy chorus and melodious, angry guitars, being in my opinion one of the best songs of the whole album. And in Migration Cult we have a great fusion of Death Metal and Rock N’ Roll, with its flammable Thrash Metal riffs complementing Key V’s deranged representation of the song’s wicked lyrics (“Marching far south from Eden / There is still something what push us on / Missing primal fixations / Will we abandon the code / The Holy Fuck”).

How the Gods Kill is an awesome tribute to one of the most eccentric musicians of all time, the one and only Danzig, keeping up with the obscurity of the original version with the low-tuned and menacing sound of bass guitar paving the path for an explosion of evil Heavy Metal. Following that superb cover song, Trust brings forward more of the band’s uproarious Death Metal with Key V and P delivering straightforward heavy music to our ears in a compelling way, whereas Generation Anthem is heavy and distorted music from the pits of Hell. Furthermore, the duo seems to love those menacing mid-tempo songs, firing blazing riffs and fierce beats nonstop. But just when you think the band is going to stick to some sort of formula they fire Piss & Laugh, showcasing a somber rhythm inspired by Dark Metal with the Blackened Doom guitars and the deep gnarls by Key V enhancing its damned atmosphere. At this point of the album, you’ll realize that calling +MROME+ just as Death or Black Metal is an understatement of their musical range and capabilities.

Once again bursting poetry and madness through the lyrics (“Monstrous iron worms / Feeding on fire / And flash / Choke the ground / March against the dawn / East from nest of crow / Days of hunger / Lions hunt”), Locust Follows Word presents a berserk intro followed by more thunderous bass lines and a grumpy attitude, with all additional elements in the background helping in strengthening the musicality considerably. The second to last blast of underground metal by this interesting project, titled Magister Figurae Morte, will kick you in the face with its pounding drums and energetic riffs in this solid display of ruthless metal from darkness, before The Arsonist closes the album majestically, with Key V impersonating the arsonist himself by setting fire to the musicality with his growls and riffs. In addition, P accelerates his beats to a traditional Black Metal style, generating a high-end feast of hellish music with a climatic ending.

+MROME+ do not have a Facebook page, a Twitter account or any other type of social media. As previously mentioned, it’s all about their music and the concept behind it, which means all things +MROME+ are summarized to their BandCamp page in the form of heavy music, with Noetic Collision on the Roof of Hell being their newest sonic experiment, but not their ultimate one at all. Fans of truly underground metal will hear more about +MROME+ in a not-so-distant future for sure, as they’re already recording Roi-de-Rats, their next full-length opus. Well, I’m already eager to see what Key V, P and the band’s original bassist (who has just rejoined the project after all these years) will offer from their arsenal of extreme and primeval music.

Best moments of the album: Crush the Moon, How the Gods Kill and The Arsonist.