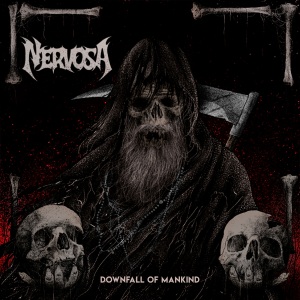 After two long years, here they finally are the unrelenting Brazilian all-female Thrash Metal commando unit Nervosa with a brand new and devastating album titled Downfall Of Mankind, delivering their usual raw aggression and untamed power throughout the album’s almost 50 minutes split into 14 compositions (including the limited edition bonus track) of killing hardcore thrash. In addition, the follow-up to their sensational 2016 release Agony marks their first with drummer Luana Dametto (who also plays drums for Brazilian Death Metal squad Apophizys), adding an extra touch of pugnacity to the band’s already heavier-than-hell and faster-than-a-bullet musicality and, therefore, providing lead singer and bassist Fernanda Lira and guitarist Prika Amaral all they need to keep haunting the souls of the lighthearted with their Thrash Metal tempest.

Downfall Of Mankind perfectly captures the live energy and the old school character that defines this São Paulo-based band without neglecting the strengths of a modern, compact soundscape, bringing the most pulverizing and sharp elements from all types of extreme music such as Thrash, Death and Black Metal, but of course always being deeply rooted in our beloved Bay Area Thrash sound. Featuring a demonic artwork by Brazilian artist Hugo Silva (Abracombie Ink), and with guest musicians João Gordo (Ratos de Porão), Rodrigo Oliveira (Korzus) and Michael Gilbert (Flotsam & Jetsam) providing their share of insanity and rage to Nervosa’s music, Downfall Of Mankind is definitely one of those albums that will inspire you to slam into the circle pit and bang your head like a maniac, two of the main goals in our good old Thrash Metal,  becoming a permanent part of your most metallic playlist. 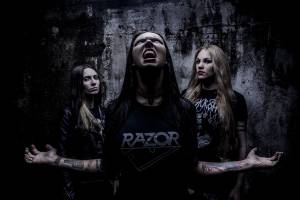 An ominous intro takes us to the demonic realm ruled by Nervosa, who don’t waste a single second and start crushing our skulls with their ruthless Thrash Metal in Horrordome, with newcomer Luana simply demolishing her drums while Fernanda delivers her already classic she-demon gnarls. This berserk tune will surely generate some interesting mosh pits during their live concerts, which is also the case in Never Forget, Never Repeat, sounding even more devilish and pulverizing and showcasing the band’s heavy artillery at its finest. Prika seems to be mastering “the art of the riff”, delivering sheer brutality in a well-balanced fusion of Thrash and Death Metal, all complemented by the song’s utterly austere, old school lyrics (“Tyranny, bigotry / Crimes against humanity / Murder, persecution / Inprisonment subordination / Enough of genocides / Enough of bloodshed / Break this perpetration / Of history’s dark past”). Then toning down a bit their rage but still sounding brutal, the power trio blasts more of their thrashing music with their riffs and beats generating a menacing wall of sounds in Enslave, followed by Bleeding, presenting hints of the contemporary music by Cannibal Corpse (which is obviously a good thing) and with Fernanda taking her growls to a deeper, more hellish level, while Luana proves why she was the perfect choice as their new drummer.

After such level of destruction, get ready for an 80’s-inspired (or I should say old school Metallica-inspired) Thrash Metal attack by those three she-devils titled …And Justice For Whom?, where the unstoppable beats by Luana dictate the rhythm while Prika continues with her shredding onrush. Needless to say, I can’t wait to see them playing this one live. And Fernanda’s rumbling bass ignites a dark, mid-tempo tune beautifully titled Vultures, a good song to break your neck headbanging with Prika once again delivering cutting riffs from start to finish (despite the fact the song could have been a little shorter, though), whereas Kill The Silence brings a classic Nervosa sonority in terms of its pace, riffs and lyrics, led by the slashing guitar lines by Prika while Fernanda keeps growling and gnarling like a beast, therefore keeping the album at a truly high level of aggressiveness. Their sonic insanity goes on in No Mercy, a more rhythmic and groovy circle pit-generator with highlights to the solid job done by Luana on drums, and Raise Your Fist!, a rebellious anthem by Nervosa bringing forward an inspirational intro with historic speeches about freedom, gender equality and equal opportunities for all, such as the timeless one by Martin Luther King, Jr., sounding melodic, violent and electrifying, all at the same time. In other words, let’s all raise our fists up in the air to this insurgent hymn by Nervosa. 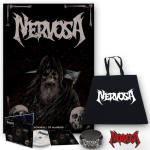 And Nervosa still have energy left for more devastation, starting with the berserk Fear, Violence And Massacre, blending the most pulverizing elements from Thrash, Death and even Black Metal, with Prika firing an awesome, melodic guitar solo halfway through it, not to mention you’ll definitely feel the urge to scream the words “fear, violence and massacre” together with Fernanda; whereas although Conflict is a decent creation by the girls, it’s a bit too generic compared to the rest of the album. There’s a lot of good stuff in the song, though, such as the incendiary riffs by Prika and its frenzied pace. The last track from the regular version of Downfall Of Mankind is the superb Cultura do Estupro, with the iconic vocalist João Gordo (Ratos de Porão) sharing the vocal duties with Fernanda in the only song of the album entirely sung in Brazilian Portuguese. I really hope João joins Nervosa during some of their live concerts to sing this cataclysmic, acid tune, with Luana sounding simply demented behind her drums. Lastly, as a bonus track to the limited edition version of the album we have Selfish Battle, featuring Rodrigo Oliveira (Korzus) on drums and Michael Gilbert (Flotsam & Jetsam) providing a nice guitar solo in a slightly different version of Nervosa, feeling more like a heavier version of 80’s Hard Rock the likes of Warlock thanks mainly to the high-pitched vocals by Fernanda.

One can never get enough of Nervosa, and if you’re already addicted to their incendiary music go check what they’re up to on Facebook and purchase your copy of Downfall Of Mankind from their own BandCamp page or from several other locations such as the Napalm Records webstore, where you can get the deluxe fan package featuring the limited edition digipack, a cover flag, a patch, leather wriststraps and a tote bag. Also, don’t forget to watch the track by track breakdown of the album by the girls on YouTube (part 1 and part 2), and obviously to keep an eye on their official website and Facebook page for whenever they take your hometown by storm. Downfall Of Mankind once again proves that thrashing like there’s no tomorrow is Nervosa’s business, and they don’t need any guy to make sure that their business continues to be more than good.

Best moments of the album: Horrordome, Never Forget, Never Repeat, …And Justice For Whom? and Cultura do Estupro.

Worst moments of the album: Vultures and Conflict.