It’s time to embark on a 65-minute journey into the abyss in the form of contemporary Black Metal by an unrelenting Cologne, Germany-based horde.

Recorded, mixed and mastered by Mario Dahmen at Liquid Aether Studios in Schladern, Germany, the breathtaking opus A Grey Chill and a Whisper is an expanded vision of contemporary Black Metal by an unrelenting German horde formed in 2002 in the city of Cologne that goes by the name of Beltez, based on the original short story “Black Banners” written exclusively for the band by German writer Ulrike Serowy (known for her novella Skogtatt). Following up on their highly acclaimed 2017 record Exiled, Punished…Rejected and dealing not only with despair and hopelessness, but also with courage and strength, A Grey Chill and a Whisper is a 65-minute journey into the abyss (plus an incredible audiobook with the full “Black Banners” story backed up by Beltez’s original music), a monolithic entity that frightens as much as it allures thoroughly crafted by vocalist Marc, guitarists Dominic and Jens, bassist Christian and drummer Sebastian, showing again what artistic freedom could mean in Black Metal, yet without denying the roots of the genre.

Featuring guest Alex Newton of Dzö-nga on keyboards, the cinematic intro In Apathy And In Slumber sets up the stage for Beltez to crush in the atmospheric The City Lies In Utter Silence, where Marc roars the lyrics with tons of anger and hatred (“Silence / Absent are any signs of life / A nameless city under a cloud-laden Sky / Dwelling aimless in vain existence / Half-awake, half-alive, half deceased”) while his bandmates smash our senses with their fulminating riffs, bass lines and beats. Put differently, it’s Black, Doom and Post-Metal all at once, and above all, it’s pitch black darkness in the form of music. Then the band comes ripping like a beast from the underworld in the doomed Black Banners, where the scorching, razor-edged riffs by Dominic and Jens walk hand in hand with Sebastian’s menacing beats, exploding into vicious Black Metal for our vulgar delectation, followed by A Taste Of Complete Extinction, another top-of-the-line, bestial Atmospheric Black Metal spawn by Beltez where Sebastian sounds utterly infernal with his blast beats and fills while Marc keeps growling rabidly, supported by the phantasmagorical keys by Jens. 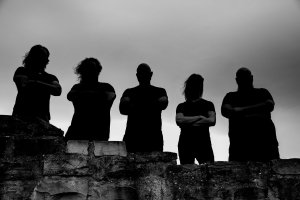 Christian takes the lead with his low-tuned, vile bass in The Unwedded Widow, again morphing into a reverberating fusion of Atmospheric Black Metal and classic Black Metal with Marc taking his enraged growling to a whole new level of despair; then a purely atmospheric and instrumental interluded titled From Sorrow Into Darkness brings some peace and serenity to our hearts before the title-track A Grey Chill And A Whisper arrives like a thunderstorm from hell, with Sebastian and his demolishing drums crafting a solid base for the headbanging riffage by Dominic and Jens and the inhumane gnarls by Marc in a lecture in contemporary Black Metal. The 14-minute full-bodied aria I May Be Dammed But At Least I’ve Found You begins in the most atmospheric way possible and gradually evolves into Beltez’s piercing music, with the band’s guitar duo breathing fire through their riffs building a menacing ambience for Marc to viciously scream the song’s words (“Dreadful fortress hovering high / Final destination after a fateful decision / Walking the road of the dead”), and curiously enough the band decided to end such grandiose album of Black Metal with a more visceral creation titled We Remember To Remember, where Christian slams his bass in great fashion together with obscure vocalizations and a sense of hopelessness, clearly drinking from the fountain of Blackened Doom.

As aforementioned, one of the versions of the album comes with a beyond special bonus called “Black Banners Audiobook”, a beautiful story that served as the inspiration for Beltez to compose the entire A Grey Chill and a Whisper, and the fact the band added background music to it plus the amazing work done by Dan Capp of Winterfylleth on narration, Corinne Henderson on female voices, Evan Hunt of MetalTower on the introduction, the artwork by Benjamin Harff and the booklet illustrations by Jana Kourgierakis gave it an even more vivid and thrilling vibe. It’s like a hybrid of storytelling and poetry that will please all metalheads who also enjoy a good reading (or listening, in this case), plus an acoustic and vile rendition of “We Remember To Remember”. You can enjoy A Grey Chill and a Whisper in full (except of course for the audiobook) on YouTube, follow those German metallers on Facebook and on Instagram, and purchase your favorite copy of the album from their own BandCamp page, from the Avantgard Music BandCamp page, from Sound Cave (in CD or LP format), from Season of Mist, from Amazon or from Walmart. Raising their black banners high, Beltez will drag you to the pits of the underworld in A Grey Chill and a Whisper, and I dare you to not get addicted to their splendid fusion of Black Metal and a captivating background story after that.

Best moments of the album: The City Lies In Utter Silence, A Taste Of Complete Extinction and A Grey Chill And A Whisper.