One of the pillars of Swedish Black Metal returns from the underworld with a new opus to prove once and for all that they’re the apocalypse. 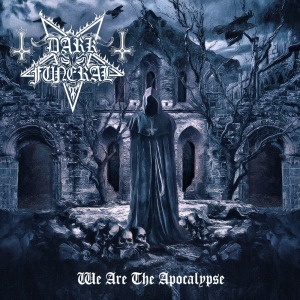 The year of 1993 was when it all began, when Lord Ahriman and Blackmoon founded the infernal war machine we now know as Stockholm, Sweden-based Dark Funeral, one of the most intense and prominent Black Metal acts ever. Now in 2022, vocalist Heljarmadr, guitarists Lord Ahriman and Chaq Mol, bassist Adra Melek and drummer Jalomaah are back from the underworld with another opus of sheer obscurity and hatred, beautifully entitled We Are The Apocalypse. Mixed by Daniel Bergstrand at Dugout Productions, mastered by Paul Logus at PLX Mastering, and displaying a devilish artwork by by Marcelo Vasco, the band’s long-awaited seventh full-length album is a lecture in Swedish Black Metal not recommended for the lighthearted, proving why the band has been haunting our damned souls for almost three decades.

The evil guitars by Lord Ahriman and Chaq Mol will pierce your minds in the infernal opening tune Nightfall, a classic Scandinavian Black Metal onrush with no artificial elements, only our good old darkness and hatred, while the tribal beats by Jalomaah ignite the Stygian aria Let The Devil In, with Heljarmadr vociferating the song’s wicked words rabidly (“I take a deep, good look inside myself / I open up the gates to let the Devil in / He’s riding on the shadow of my soul / And everywhere I go, he’ll be there walking beside me”). Then get ready to be pulverized by Dark Funeral in When Our Vengeance Is Done, a fast, furious and demented creation by the band showcasing those old school Black Metal riffs we all love so much, whereas Nosferatu carries a beautiful name for another blackened sonic attack by the quintet, with Jalomaah being on fire behind his drums with both his rhythmic and demented beats.

Slowing things down a bit it’s time for the Blackened Doom-infused chant When I’m Gone, perfect for the darkest days of your useless lives, with Adra and Jalomaah making our heads tremble to the sound of their respective bass and drums. Their evil sounds keep permeating the atmosphere in Beyond The Grave, with Jalomaah’s hellish blast beast providing Heljarmadr all he needs to growl like a creature from the underworld. A Beast To Praise brings forward absolutely dark, psychological lyrics barked by Heljarmadr (“In solitude I am talking to ghosts / And while the netherworld is being ripped open wide / My human flesh is still keeping me / Between these walls, and I am eager to die”) while Lord Ahriman and Chaq Mol slash our senses with their otherworldly riffs in a lecture in Black Metal; whereas cryptic guitar lines kick off their second to last breath of obscurity titled Leviathan, not as inspiring nor as visceral as the other songs form the album, albeit still extremely violent. And last but not least, it’s time for one final explosion of pure Black Metal in the form of We Are The Apocalypse, with the demolishing drums by Jalomaah walking hand in hand with the strident riffage by the band’s guitar duo. 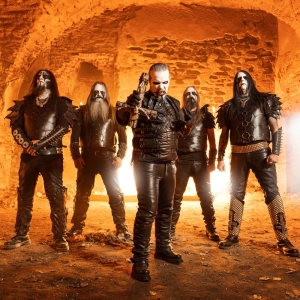 Such beast of an album can be enjoyed in its entirety on YouTube and on Spotify, but if I were you I would certainly purchase your favorite version of this devilish masterpiece by clicking HERE. We Are The Apocalypse, which will undoubtedly feature among the best metal albums of the year in countless lists from all over the world, has no artificial elements added to it, just the wrath of five insanely talented Swedish black metallers who remain loyal to the foundations of the genre even after so many years on the road. Hence, don’t forget to follow Dark Funeral on Facebook and on Instagram, and to subscribe to their official YouTube channel for more of their disturbing Black Metal. Because you know, when it comes to Black Metal, Dark Funeral are indeed the apocalypse.

Best moments of the album: Nightfall, When Our Vengeance Is Done, Beyond The Grave and A Beast To Praise.

Worst moments of the album: Leviathan.