From the ashes these Italian metallers rise with more of their shredding guitar solos, blasting drums and soaring vocals in the form of their sophomore album, representing an evolution in their visceral sound. 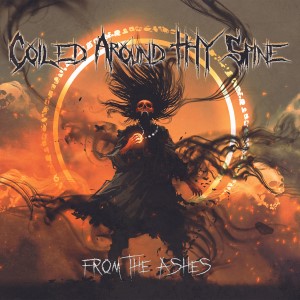 Three years after the release of their fulminating debut album Shades, vocalist Daniele Rosso and guitarist and bassist Sergio Costa, supported by session drummer Tomonobu ‘Tomi’ Inoue and collectively known as Turin, Italy-based Melodic Death Metal outfit Coiled Around Thy Spine, are back in action with their shredding guitar solos, blasting drums and soaring vocals inspired by classic and new Death Metal in the form of their sophomore effort entitled From The Ashes. A true step up in their career, From The Ashes offers us listeners an evolution in the sound by the Italian duo from their debut album, being highly recommended for fans of renowned acts the likes of Arch Enemy, Death, Trivium, early In Flames and Megadeth, and above all, for anyone who enjoys a huge dosage of violence mixed with great melodies and a very good reason for headbanging like there’s no tomorrow.

And futuristic sounds arise from the underworld in the opening tune Paracosm, before Sergio and Tomi begin their respective riffs and beats attack, exploding into sheer Melodic Death Metal to the wicked roars by Daniele while all is carefully spiced up by a trademark guitar solo by Sergio. Then epic, Stygian background elements set the tone in the visceral tune Back To The Dark Dimension, with Daniele’s growls and screams getting even more enraged while Sergio continues to slash his axe majestically; and there’s no time to breathe as Coiled Around Thy Spine keep crushing our souls with their melodic and intricate Death Metal in Breath Of Existence, where Tomi is once again bestial behind his drums, not to mention the awesome job done by Sergio with both his riffs and bass lines. After such demolishing tune, a sinister and melancholic intro morphs into a mid-tempo Melodic Death Metal feast the likes of early Arch Enemy in Graveyard Of Thoughts, an excellent choice for breaking your neck to the pounding drums by Tomi.

The band keeps exploring darker paths in Burning Souls, another somber creation by Daniele and Sergio showcasing those piercing guitars that only Melodic Death Metal can provide us. It would have been more effective if a little shorter, though, whereas back to a more epic and violent mode it’s time for a fulminating metal onrush entitled Survival Instinct, with Sergio’s riffs generating a flammable paradox with the song’s background keys while Daniele and Tomi fire sheer animosity and hatred through their respective growls and beats. Then get ready to have your ears and minds pierced mercilessly by the scorching riffs by Sergio while Daniele keeps gnarling like a beast in Red Rising Sun, keeping the album as sulfurous and obscure as it can be, while the title-track From The Ashes closes the regular version of the album on a demolishing note, inviting us all to bang our heads and slam into the pit while Daniele vociferates rabidly nonstop. Furthermore, if you go for the special edition of the album you’ll be treated to two amazing cover songs as a bonus, those being Like Hell by Loudness and Bite The Pain by Death (and you can check the original ones HERE and HERE). Needless to say, Coiled Around Thy Spine simply kicked some serious ass with both versions. 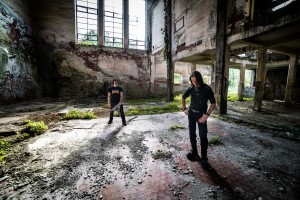 In a nutshell, the guys from Coiled Around Thy Spine have outdone themselves in From The Ashes (which is available for a full listen on Spotify), delivering a thrilling hybrid of old school and modern sounds that will undoubtedly please any fan of Heavy Metal, even the ones who don’t enjoy extreme music that much. Hence, in order to show those Italian metallers your utmost support, don’t forget to follow them on Facebook and on Instagram, to subscribe to their YouTube channel, and of course, to purchase From The Ashes from their own BandCamp page, as well as from Apple Music or from Amazon. And let’s all hope Coiled Around Thy Spine do not take too long to get back “from the ashes” with more of their sick and visceral music.

Best moments of the album: Back To The Dark Dimension, Breath Of Existence, Survival Instinct and From The Ashes.

If you consider yourself a diehard fan of modern-day Melodic Death Metal you have to take a very good and detailed listen at Shades, the debut album by Italian metallers Coiled Around Thy Spine. Formed in 2017 in the city of Turin by Italian guitarist Sergio Costa, when he met American drummer David Archie Weiss online, Coiled Around Thy Spine not only have their core essence deeply rooted in Melodic Death Metal, but it’s the classic Death Metal influences spiced up by symphonic elements that make their music so entertaining, electrifying and vibrant, with all songs in Shades being highly recommended for slamming into the pit, banging your head nonstop or simply enjoy their intricate and flammable waves.

After Sergio and David started working on the music together, they decided to expand beyond the initial instrumental idea, recruiting Italian vocalist Daniele Rosso to complete the band’s lineup.  Unfortunately, David decided to quit the band for personal reasons before the release of Shades, but that doesn’t mean Coiled Around Thy Spine will call it quits and cease their quest for top-tier metal music. Quite the contrary, featuring a simple but very effective artwork by TheSmashedRabbit, Shades is an astonishing combination of brutal violence, shredding guitar solos, blasting drums and soaring vocals, inspired by classic and melodic Death Metal as well as contemporary metal masterpieces alike, proving this up-and-coming metal unity is here to stay, and after listening to the album you’ll certainly be eager for more of their music.

A movie-inspired intro named Candles builds the ambiance for the hard-hitting tune [God Mode: On], blending the most visceral and modern elements from Melodic Death Metal and Blackened Death Metal, sounding absolutely pulverizing form start to finish with Daniele blasting devilish gnarls and growls while Sergio Costa shreds his guitar in a demonic way. Put differently, this can be called an evil and bastard hybrid of Behemoth and Dimmu Borgir. Then we have Dissected, where David sounds beyond brutal on drums, elevating the impact of this hellish tune considerably, also presenting hints of the music by Arch Enemy on vocals and guitars and flowing demonically until the end; followed by How Freedom Dies, another crushing spawn by the power trio where the strident and sharp sound of guitars is simply outstanding, bringing a high dosage of malignancy to the music. Moreover, its background keyboards add a touch of delicacy to the ambience, bringing more balance to this well-crafted, full-bodied chant. And their Arch Enemy-like vein arises once again in the title-track Shades, a darker and more melodic metal extravaganza than its predecessors, with the only issue being that the music never reaches the same speed as the rest of the album (its level of heaviness and aggression is still quite gargantuan, though). 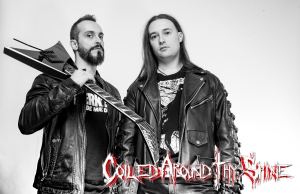 Their intricate and berserk feast of sounds and tones goes on in Subhumanized, led by the lancinating riffs and solos by Sergio while David keeps smashing his drums, sounding modern and vile from start to finish, whereas in The Sick Game, their most demonic song of all, guitars and keys complement each other flawlessly, supported by the pulverizing drumming by David. Furthermore, the song also displays interesting nuances of Progressive Death and Black Metal, resulting in a lesson in extreme music by the Italian trio where Daniele bursts his lungs screaming like a demon. The second to last spawn of dark sounds by Coiled Around Thy Spine, titled In Vain, showcases more of their high-octane, flammable music tailored for banging your head frantically, with all three members sounding demented with their instruments (in special David and his Stygian beats and fills), and  their final avalanche of extreme sounds, named Safe, is perhaps their most obscure one, leaning towards modern Black Metal in a true feast of rhythm, harmony, and darkness led by Daniele and his otherworldly growls, not to mention Sergio and his neck-breaking riffs, ending the album in a menacing and climatic manner.

You can listen to Shades in full on Spotify, and if you have what it takes to face the modern and absolutely threatening music by Coiled Around Thy Spine you should definitely visit their Facebook page for news, tour dates and everything else that’s related to the band, and purchase the album on iTunes or on Amazon. As aforementioned, Shades combines the brutality and heaviness of Death Metal with the finesse of modern-day Melodic Death Metal in a fantastic way, proving this now Italian duo (who will certainly find another sensational drummer to replace David soon) has all that’s needed to thrive in the world of heavy music. And we’ll all be eagerly waiting for more of their incendiary music in the near future, of course.

Best moments of the album: [God Mode: On], How Freedom Dies and The Sick Game.

Worst moments of the album: Shades.