The most powerful Swedish Viking horde in the world attacks Toronto once again, setting the city on fire on a chilly night. 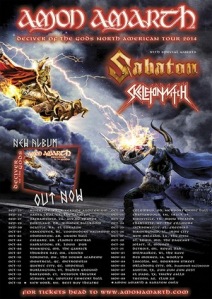 As the fans of Game Of Thrones like to say, “Winter is coming” pretty soon, which means it’s getting colder and colder here in Toronto and, of course, in the entire Canada. So why not turning up the heat with some brutality, Viking music and good beer on a Friday night at the Sound Academy? The bands chosen to make our lives a lot warmer were American Thrash/Death Metal band Skeletonwitch, Swedish Power Metal band Sabaton and the main attraction of the night, Swedish Melodic Death Metal icons Amon Amarth.

Opening the night with the same energy of a stampede of raging bulls and still promoting their latest album, the insane Serpents Unleashed, the ‘Witch were absolutely awesome from start to finish, even with very limited time to deliver all their havoc. Chance Garnette’s unique devilish vocals and Dustin Boltjes killing everything on drums were the highlights of their wicked performance, with songs like I Am of Death (Hell Has Arrived), Serpents Unleashed and Within My Blood being so brutal I’m pretty sure most of the people who were already at the venue during Skeletonwitch might have an “interesting” pain in their necks and bodies until today. Chance said they’re returning to Toronto in the Spring, so I guess we have enough time to recover until we break our fuckin’ necks once again with more of their demonic metal.

Setlist
1. More Cruel Than Weak
2. I Am of Death (Hell Has Arrived)
3. From a Cloudless Sky
4. Burned from Bone
5. Beyond the Permafrost
6. Unending, Everliving
7. Stand Fight and Die
8. Serpents Unleashed
9. Within My Blood 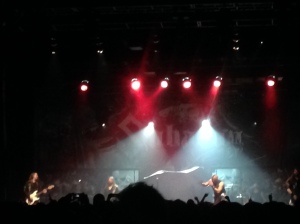 Having recently released their seventh studio album, entitled Heroes, Sabaton had the tough mission of entertaining a crowd extremely avid for Amon Amarth. Well, although I myself consider their music somewhat generic, they did a pretty good job and got a great reaction from the audience, especially during songs such as 40:1, Swedish Pagans and Metal Crüe. Frontman Joakim Brodén has a very limited vocal range if compared to many other Power Metal singers, but his interaction with the fans, in special his jokes about Canada always beating Sweden in ice hockey, were sufficient to avoid any negativity from the crowd and to keep everyone awake and pumped up for the main attraction. The only problem is, as aforementioned, their generic lyrics and musicality: how many other bands, and you can limit your analysis only to Sweden if you prefer, have songs with the words “pagan”, “warrior”, “fight” or “metal” in their names, and those more-than-generic galloping riffs? If they fix that, they can go a lot further in their career. 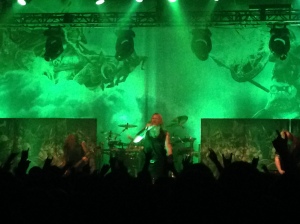 Perhaps one of the most stable band formations in the history of heavy music, with the same band members being together since 1998 (and three out of five since their beginnings in 1992), Swedish Viking horde Amon Amarth delivered almost everything their fans were asking for, except for their Viking ship and fireworks, which couldn’t be part of their performance due to venue limitations.

However, the absence of fireworks and other theatrical items was completely forgiven and forgotten when the band started playing their unique epic metal. It was pure brutal headbanging, fists and horns in the air, beer drinking and lots of singing throughout their whole concert, with everything getting even heavier and more fun during classics like Death in Fire, Guardians of Asgaard, Cry of the Black Birds, and of course the highly anticipated Viking hymns Twilight of the Thunder God (where frontman Johan Hegg entered wearing a Viking helmet and holding the Hammer of the Gods as usual) and The Pursuit of Vikings, with all fans screaming as loud as possible its famous epic chorus nonstop, for the band’s total delight. The sincere smile on Johan’s face was priceless.

In addition, their newer songs from their latest albums, Surtur Rising (2011) and Deceiver of the Gods (2013), also worked really well, with highlights to For Victory or Death, Father of the Wolf, Destroyer of the Universe and War of the Gods. I love metal music when it’s played as fast as the band is capable of, which was the case for all those songs. I just thought there were very few mosh pits, maybe because it was getting really late and all fans were exhausted after a long day at school or work, and after so many hours of energetic heavy music. Being a headbanger demands a lot of our bodies, especially when you have such electrifying bands like Skeletonwitch and Amon Amarth playing live in front of you, don’t you agree?

Anyway, during one of his many fun interactions with the crowd (while drinking beer from his horn), Johan Hegg also spoke about ice hockey and the NHL, which makes me wonder if this is the biggest connection between Canada and Sweden, or if Heavy Metal is indeed what makes these two cold but totally amazing countries be so close to each other. Based on the happiness and level of energy spread among all fans that attended the concert at the Sound Academy, and as a true heavy music lover, I have to go with the second option without a shadow of a doubt. And now, all that’s left for us fans is the never-ending wait for another Viking invasion of Canada.

Encore:
16. Twilight of the Thunder God
17. The Pursuit of Vikings