Heretics, atheists and rebels, it’s time to burn in the fires of the dark and occult Black Metal masterfully crafted by the greatest Greek institution in the history of heavy music. 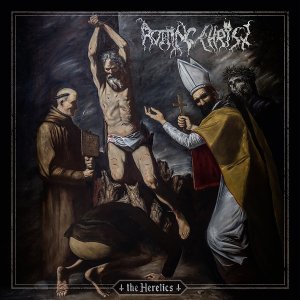 “Since man cannot live without miracles, he will provide himself with the miracles of his own making. He will believe in any kind of deity even though he may otherwise be a heretic, an atheist, and a rebel.” – Fyodor Dostoyevsky

It is not a coincidence that our review number 666 exhales blasphemy, heresy and, above all, first-class occult Black Metal and a lot of fire. Hailing from Athens, the capital of the beautiful Greece and the heart of Ancient Greece, here comes the greatest Greek metal institution of all time, the almighty Rotting Christ, spitting fire upon humanity with their fantastic and very atmospheric new opus, entitled The Heretics, their thirteenth studio album and a beautiful follow-up to their excellent 2016 release Rituals.  Recorded at Pentagram Studios in Athens, mixed and mastered at Fascination Street Studio in Örebro, Sweden, and featuring a stunning artwork by Ukrainian designer Vyacheslav Smeshko and cover art by Greek artist Maximos Manolis, Rotting Christ’s new album is absolutely incendiary, going against all types of religion, church and creed.

And when I say incendiary I’m not exaggerating, as pretty much every single song from The Heretics mentions the world “fire”, proving the band’s mastermind, vocalist and multi-instrumentalist Sakis Tolis and his brother, drummer Themis Tolis, knew exactly what they were doing when turning what it truly means to be a heretic into their unparalleled Dark Metal. All lyrics are obscure, austere and rebellious, which together with all beautiful intonations by guests Stelios Steele and Dayal Patterson, as well as an array of guest musicians such as Irina Zybina (vocalist for Russian Pagan/Folk Metal bands Alkonost and Грай), Alexis Karamelis and Melechesh Ashmedi, makes the experience of listening to The Heretics truly hypnotizing, enfolding our souls in darkness and fire while the music remains as heavy, intricate and epic as we got used to from the Tolis Brothers. In other words, are you ready to burn in the purifying fires of the Dark Metal blasted by the one and only Rotting Christ? 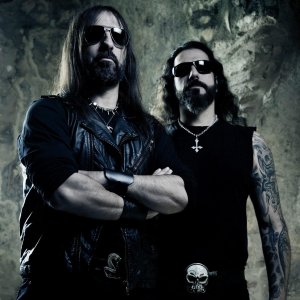 The imposing In the Name of God brings forward a very atmospheric start, with the words by Russian philosopher Fyodor Dostoyevsky spoken by guest Stelios Steele setting the stage for the crushing wall of sounds created by the Tolis Brothers, always in the name of fire, not to mention how its headbanging riffs will inspire you to break your neck in half, while Vetry Zlye, also called “Ветры злые” (which translates as “evil winds” from Russian), is another beautiful composition by those Greek metallers with the help of guest vocalist Irina Zybina and her mesmerizing voice, getting closer to what the band did in Rituals and with the drums by Themis sounding as imposing and demolishing as we like it in classic extreme music. “The mind is universe and can make a heaven of hell a hell of heaven”, and it’s with those words by English poet John Milton that Rotting Chirst kick off another thrilling hymn titled Heaven and Hell and Fire, showcasing austere, cryptic lyrics (“Beyond the burning fire, heaven and hell / Today I give you choices: life or death / I offer you desire, I sentence you to death / Today I give you a choice, I give you Hell”) that perfectly match with the song’s flammable, classic and very melodic musicality, with Sakis once again being a beast with his riffs and unmatched roars.

Hallowed Be Thy Name is a mesmerizing and extremely obscure hymn by led by Themis’ pounding beats, with Sakis extracting those low-tuned, Stygian sounds we love so much from his guitar and bass. Put differently, join their mass and burn with them, also savoring the words by William Shakespeare powerfully declaimed by Stelios, putting a majestic end to the song. Following such enfolding tune we have Dies Irae, where Sakis’ work on the guitar is the perfect example of how heavy and harmonious a riff can be at the same time, as well as the song’s background choir bringing even more thunder to this already potent song; whereas in I Believe (or “Πιστεύω”), which is based on a poem by Nikos Kazantzakis, a giant of modern Greek literature, the instrumental pieces are a bit too “polluted”, but nothing that makes the song boring or not enjoyable. Moreover, it should work a lot better live as it has the potential to generate huge circle pits due to its frantic pace. Back to a more visceral mode, we have the fabulous Fire God and Fear, with the words by French philosopher Voltaire (“Those who can make you believe absurdities can make you commit atrocities.”) generating a stunning paradox with the birds gently chirping in the background in the beginning, before the scorching riffs and thunderous drums by the Greek brothers of metal urge us all to bang our heads nonstop. Hence, this is by far one of my favorite songs of the entire album, where we can savor that classic Rotting Christ sonority with a welcome contemporary twist.

The Voice of Universe is another song that will reach deep inside your mind and soul, with Sakis vociferating its insurgent words (“The angel, I won’t serve again / I won’t have a place anymore in heaven / It’s my own soul, it’s my own mind / And can make a heaven of hell, a hell of heaven.”) while Themis keeps blasting his trademark tribal beats, and when you think those Greek metallers couldn’t sound more mesmerizing and brutal at the same time they deliver the excellent The New Messiah, featuring an excerpt from Matthew 24:11 (“And many false prophets will arise and lead many astray.”), with the guitars and all background elements and voices filling out all spaces in the air. And lastly, as the icing on the cake we have the magnificent, somber and ferocious The Raven, based on what’s probably the most famous poem by the iconic american writer Edgar Allan Poe, offering our ears over five minutes of cutting riffs, Black and Doom Metal drums, and endless poetry, with highlights to the sensational job done by Stelios Steele, giving life to Poe’s renowned lines. Actually, if you have some spare money to purchase any of the special editions of the album, you’ll also be able to enjoy the bonus tracks The Sons of Hell and Phobos (also called “The Sons of Hell, Pt. 1 & 2” by some people), two dark and demolishing tunes that make it worth the additional investment, or in other words, two excellent samples of modern-day Black Metal infused with epic and atmospheric elements.

In summary, The Heretics, available for a full listen on YouTube and on sale from several locations such as the band’s own BandCamp page and the Season of Mist webstore (and if I were you, I would go for the limited edition deluxe wooden boxset as it comes with several awesome perks), is definitely an album that will touch your heart and soul, taking you on a fascinating musical ride through the woes of religious wars, Zoroastrianism and the eternal war between good and evil. That’s what the unrelenting Rotting Christ offer us in their top-of-the-line new opus, and may Sakis and his horde continue to burn us all heretics, atheists and rebels with their dark and occult Black Metal for many decades to come.

Best moments of the album: Heaven and Hell and Fire, Hallowed Be Thy Name, Fire God and Fear and The Raven.

Worst moments of the album: I Believe.

Released in 2019 Season of Mist