If you were born under black wings and love the taste of destruction in music, the Dööm Metal blasted by this fantastic power trio from “Hellsinki” is all you need to keep enjoying your miserable and excruciating time on earth. 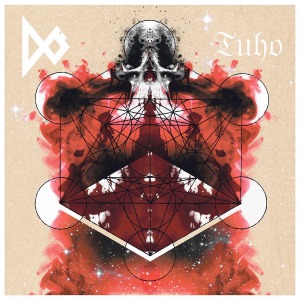 If you’ve been following The Headbanging Moose for a while, you’ve already been in contact with the up-and-coming Finnish Doom/Stoner Metal power trio Dö. In fact, these talented guys from Helsinki, Finland do not play your regular Doom Metal, but instead they play what we can call “Dööm Metal”, and if the music found in their 2015 EP Den wasn’t dark enough for you, those three unholy bastards are back from the depths of their distinct city with another blast of hellish riffs, mesmerizing beats and low-tuned keys and growls in the form of Tuho, their first (and awesome) full-length opus.

Tuho is the Finnish word for “destruction”, and there couldn’t be a better definition for the sludgy and obscure turmoil beautifully crafted by Dö. Despite the change in their lineup due to the departure of drummer Peat Rex, the band keeps firing their characteristic demonic sounding flawlessly, now with Joe E. Deliverance (where “E” stands for “Epic”) taking care of the ritualistic beats and pulse that make their music so captivating. While listening to Tuho, although you will be facing 42 minutes of damnation, grief and sorrow, I’m absolutely certain you will enjoy every single second and go back to the starting point as soon as the last song is over, just like what you normally do with any album by Black Sabbath, Dö’s biggest influence and guiding (dark) star in the world of Doom Metal.

Relax, take a deep breath and fill your mind with your darkest thoughts, because this is what Dö want you to do during the wicked opening track Born Under Black Wings. The Sabbath-like riff by guitarist Big Dog guides its tribal intro, making this the perfect drug for Doom and Stoner Metal addicts, while lead singer and bassist Deaf Hank barks the most obscure and anguished vocals and growls you can imagine. Needless to say how unhappy the lyrics are during the song’s eight evil minutes, with Deaf Hank reminding us at the end of the song that “There’s no Messiah!” (and he’s damn right about that). And following that powerful start we have Everblast II (The Aftermath), a doomed massacre tailored for fans of the dark side of music where newcomer Joe E. Deliverance seems excited to destroy his drums the way he smashes them. Furthermore, the spot-on guitar solos by Big Dog add more feeling and intricacy to the overall sonority, fueling the whole trio to generate even more destructive and ill-tempered music, and consequently getting to a point the uproar will break your neck so heavy it becomes. 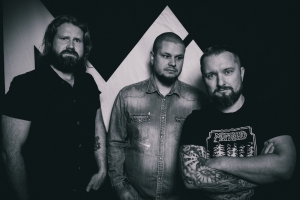 In Ex Oblivione, or “the amnesty” from Latin, a slow and eerie intro grows into a pure Doom Metal instrumental tune where you can sense that all three band members are in some sort of trance. It’s hard to say which musician has the best performance in this solid song due to the high quality of the music coming out of all instruments, and as I don’t want to pick a fight with any of them I’ll leave it for you to decide, sounds good? But before you choose your favorite member of the band, enjoy the distorted noises flowing from the bass guitar by Deaf Hank until a violent guitar riff comes crushing our spines in Kylmä, or “cold” from Finnish (and we all know how cold Finland can be). I must say that this guy sounds truly demonic when growling in his mother tongue in this impressive display of Sludge and Doom Metal, with some effective hints of Black and Death Metal thoroughly added to its last part, which ends up making the song transpire violence, malignancy and sorrow.

Hail the Fire, a gentle acoustic tune that sounds introspective and heavy even without being electric, works as an intro to their boldest composition to date, entitled Forsaken Be Thy Name. Be prepared for 12 minutes of awesome distortions, low-tuned bass lines and hypnotizing beats, where Dö professionally (and pleasantly) blend the music by icons such as Black Sabbath, Triptykon and Celtic Frost, among others, with their unique Scandinavian punch. The second half of this vile hymn becomes a completely different song, still sounding Doom Metal but slightly more melodic, ending with a soulful solo by the talented Big Dog and properly concluding another thrilling chapter in the career of those Finnish metallers.

You can listen to Tuho in its entirety HERE, and while you do that go check the band’s Facebook page and YouTube channel, and don’t forget to grab a copy of this masterpiece of damnation at their BandCamp page or at the Ozium Records’ webstore. If you were also born under black wings and love the taste of destruction in music like what these fantastic power trio from “Hellsinki” can generate, their Dööm Metal is all you need to keep enjoying your miserable and excruciating time on earth. Yes, that thing you usually call “life”.

Best moments of the album: Born Under Black Wings, Everblast II (The Aftermath) and Kylmä.