Derranged howls, mesmerizing riffs, distorted screeches and hellish beats. These are the main ingredients for one of the most unique and interesting heavy albums from the past few years, brought forth by an eccentric duo from San Francisco, California.

Sometimes I think I overuse the words “weird”, “eerie” and “unnatural” in our reviews at The Headbanging Moose, but after taking a listen at Cursus Impasse: The Pendlomic Vows, the first full-length release by American Black/Death Metal act Howls Of Ebb, you’ll have to agree with me there are no better words to describe the distinct music crafted by this talented duo from San Francisco, California. This is not an album for the regular fan of heavy music, but a journey though the most distorted thoughts and horrifying visions created deep down the human mind.

After releasing their debut EP Vigils of the 3rd Eye in 2014 and the MLP The Marrow Veil in 2015, it’s time for Howls Of Ebb to expand their deranged horizons and offer another blast of the freakish drug they call music, forged in the pitch black darkness of their evil den in the United States. Simply look at the names of the songs and tell me if you’ve ever seen anything as crazy as that in your entire life as a metalhead, but when you hit play you’ll realize those names are even too “soft” for all the insanity and outcry coming out of the screams and strings by Zee-Luuuvft-Huund and the beats by Roteen’ Blisssss, not to mention the eccentric cover art named “Theoin II”, by Italian artist Agostino Arrivabene.

In the opening track, curiously entitled The 6th Octopul’th Grin, distorted and piercing noises and growls attack the listener mercilessly, with its Doom Metal beats and wicked riffs creating a tempestuous ambience, therefore turning this amazing song in the perfect soundtrack to a soul-torturing horror flick. If you survive this demented tune, you’ll be smashed by a furious Progressive Black Metal turmoil named Cabals Of Molder, where the guitar sounds like anguished screams by an evil entity from hell, being perfectly complemented by its constantly-changing rhythm and the grim vocals by Zee-Luuuvft-Huund.

The slower and sinister tune Maat Mons’ Fume offers a creepy atmosphere enhanced by its somber lyrics (“Fetid foul upon Sullied Jowls / Endlessly propagate! / We send gifts from afar / Now, Giant Red Tomb Agitate!”), with both guitars and drums growing into a thunderous level of aggression that goes on until a purely Doom Metal ending (guided by the low-tune bass lines by Zee-Luuuvft-Huund) put an end to this hellish creation. There was only one thing that came to my mind while listening to 7 Ascetic Cinders, 8 Dowries of gA’nOm: this is the type of song that would never, ever play in any radio station so anti-mainstream it is, which in the end means it reached its main goal, right? This multi-song brings forward seven minutes of distortions, vociferations and demonic echoes not for the average listener, and it’s interesting how each instrument sounds “individualist” at first, but together they work extremely well. 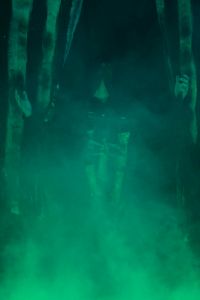 Gaunt Vertigo is a smooth but dark instrumental bridge that prepares the listener to The Subliminal Lock – A Precursor To Vengeance, an explosion of Black Metal and Blackened Doom showcasing lyrics as bizarre as possible (“Come Dark Morbid Zen! / Illusory sub-Gnosis takes deeper root / Fleshly cowls crawl deep in the soot / The wick is raised, eyes in pursuit / Come Dark Morbid Zen!”), with the instrumental pieces always “surprising” the listener with all tempo changes, distorted passages and mesmerizing riffs and screeches. And as one last raid we have The Apocryphalic Wick, where after its initial three minutes of wicked noises, an obscure feeling grows uncontrollably until demonic growls open the gates of the underworld. Moreover, the despair in the voice by Zee-Luuuvft-Huund is superb, as if he’s getting asphyxiated due to his soul being consumed by darkness.

This unusual and interesting opus can be found on sale at the I, Voidhanger Records’ BandCamp, or at the Cagliari Records’ BandCamp or webstore. And if you like the  weird effect caused by the noises from Cursus Impasse: The Pendlomic Vows penetrating your ears, go give Howls Of Ebb a shout at their Facebook page. Or maybe I should say you must give them a deranged howl instead, it all depends on how much your soul gets darkened by their music.

Best moments of the album: The 6th Octopul’th Grin and Maat Mons’ Fume.

Released in 2016 I, Voidhanger Records