Are you ready for a fast and epic fusion of Thrash and Power Metal? That’s exactly what those UK-based headbangers have to offer us all in their brand new album. 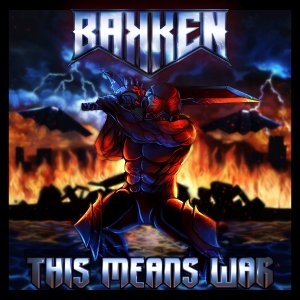 Formed in 2011 in the city of Belfast, Northern Ireland, the unstoppable Thrash/Power Metal quintet known as Bakken has quickly amassed a loyal following thanks to the incredibly positive press attention gained worldwide since the release of their 2012 debut album Death Of A Hero, describing their sound as “combining the visceral edge, gruff vocals and choppy riffing of early Thrash Metal with melodic sensibilities and complex song structures of German Power Metal and NWOBHM”, being therefore highly recommended for fans of the incendiary music by renowned acts like Iron Maiden, Judas Priest, Megadeth, Dio, Helloween, Gamma Ray and so on. Now in 2020 the band comprised of Frank Levi on lead vocals, Simon Pickett and Shaun Nelson on the guitars, Thomas Alford on bass and Niall McGrotty on drums returns with the follow-up to Death Of A Hero and to their 2014 EP Worldwide Genocide, the full-length metal extravaganza titled This Means War, featuring eight powerful original tracks enfolded by an old school artwork by UK artist Isaac Levi, aiming at cementing Bakken as one of the driving forces of the new Northern Irish metal scene.

Imposing, cinematic sounds kick off the opening track This Means War, exploding into first-class classic Power Metal led by Niall’s crushing beats while Frank delivers his trademark high-pitched screams supported by his bandmates’ spot-on backing vocals, resulting in the best possible start to such fun album. Then drinking from the same metallic fountain as classic German acts such as Helloween, Primal Fear and Gamma Ray the band offers us all Cold Blooded Murder, where Simon and Shaun are on fire with their pure Heavy Metal riffs and solos; whereas Star Machine brings to our ears a galloping rhythm spearheaded by Niall and Thomas with their rumbling beats and bass jabs, respectively. It’s indeed a great option for banging your head nonstop, also presenting a high dosage of Thrash Metal in its flammable riffs, and putting the pedal to the metal it’s time for a high-octane Power and Thrash Metal attack titled Evil Walks This Way, a groovy and vibrant composition where Thomas is ruthless with his thunderous bass, providing Frank a strong base for his piercing vocal lines. 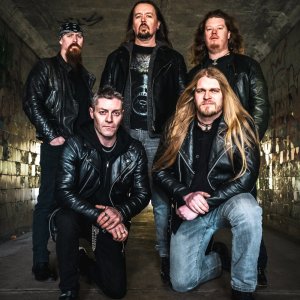 Sinister sounds and notes ignite the Dio/Queensrÿche-inspired semi-ballad In Requiem, where Frank displays a potent vocal performance while Simon and Shaun keep the atmosphere utterly dark with their classic riffs, despite the fact that the song goes on for a little too long, though. Back to a more aggressive and thrilling sonority the band blasts the epic Two-Edged Blade, another tune showcasing pounding and rhythmic beats, incendiary guitars and the always soaring vocal lines by Frank, all spiced up by their razor-edged guitar solos, making it impossible to stand still to their personal “tribute” to all things NWOBHM. After such breathtaking tune it’s time for We Fight, a rebellious anthem by Bakken exhaling pure Melodic Metal, as fast and electrifying as it can be with Niall obviously sounding like a machine gun on drums accompanied by the band’s inspired stringed trio. It will surely put you to heabang like a maniac and raise your horns in the name of metal, before an 80’s Hard Rock-inspired intro ignites the closing tune Storm Angels, with its smashing drums and crisp riffs generating a captivating ambience during its almost six minutes of potent and dense sounds masterfully delivered by the quintet, flowing smoothly until its climatic finale.

In a nutshell, if fast and classic Heavy Metal is your cup of tea, don’t waste a single second and go take a good and detailed listen at This Means War in its entirety on Spotify, and of course grab your copy of the album from the band’s own BandCamp page or from Apple Music. Also, don’t forget to follow those Northern Irish metallers on Facebook to keep informed about their news, releases and tour dates, and to subscribe to their YouTube channel for more of their traditional metal music. Bakken might not be reinventing Heavy Metal with This Means War, and that has never been their goal anyway, but they’re indeed providing us metalheads a very enjoyable option for hitting the road with your loved ones, working out at the gym or simply for staying home and savoring our beloved Heavy Metal, showing all your admiration and respect for one of the most important (and most captivating) genres in the history of music.

Best moments of the album: Cold Blooded Murder, Two-Edged Blade and We Fight.

Worst moments of the album: In Requiem.