What’s the best thing to do during this never-ending pandemic? This talented American group has the answer to that armed with their brand new album of breathtaking Progressive Power Metal. 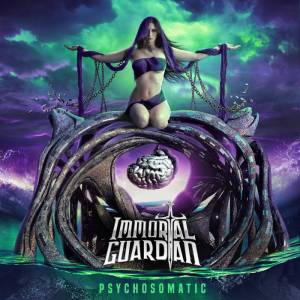 After winning over new audiences with their acclaimed 2018 debut full-length album Age of Revolution and touring relentlessly alongside fellow shredders such as Marty Friedman, Powerglove and Exmortus, Austin, Texas’ own Progressive Power Metal entity Immortal Guardian is back in action in 2021 with their sophomore effort, entitled Psychosomatic, offering their fans more of what they like to call “Super Metal”. As a matter of fact, as the spread of COVID-19 and the subsequent pandemic began to ensue, each member of the band retreated to their respective hometowns; guitarist and keyboardist Gabriel Guardian (also known as Gabriel Guardiola) remained in Las Vegas, Nevada, in the United States, vocalist Carlos Zema (of bands like Outworld and Heaven’s Guardian) recorded his vocals from his home in Brazil, new drummer Justin Piedimonte stayed in Montreal, Canada, and new bassist Josh Lopez remained in the band’s native Texas. With shutdowns around the world being enforced, the band completely scrapped the originally planned record that they had been working on and were heavily inspired to write and create a new thematic record about their emotions surrounding current events, with the final result being at the same time epic, bold and of course very personal to each one of those four talented musicians.

The title-track Psychosomatic beings in an imposing manner led by the whimsical keys by Gabriel, gradually evolving into a feast of Progressive Metal showcasing the high-pitched screams by Carlos (and somewhat working as an extended intro to the rest of the album), and they put the pedal to the metal in the heavy and groovy Power Metal tune Read Between the Lines, with the bass jabs by Josh adding sheer heaviness to the overall result while Carlos continues to shine on vocals. Then it’s time to enjoy this eternal lockdown together with the guys form Immortal Guardian in the multi-layered, electrifying Lockdown, with Justin dictating the pace with his intricate beats while Gabriel kicks some serious ass with both his riffs and keys, whereas featuring guest guitars by Marcelo Barbosa (of Almah and Angra), Phobia is another thunderous dosage of their fusion of Progressive and Power Metal where Gabriel, Josh and Justin are in absolute sync with their sonic weapons. And more of their intricate sounds and magical passages are offered in the epic extravaganza titled Clocks, with the keys by Gabriel generating a beautiful ambience perfect for his own piercing guitar solos.

After the short atmospheric interlude Self-isolation, let’s keep banging our heads to the sound of the Heavy Metal hurricane titled Goodbye to Farewells, featuring guest vocals by Mary Zimmer (of Helion Prime), with all band members extracting tons of adrenaline from their instruments while Mary sounds utterly bestial with her harsh roars, showcasing a different side from her work with her main band. Then in Candlelight we’re treated to a pensive, melancholic intro where Josh adds his share of darkness through his bass, evolving into a more traditional hybrid of Heavy Metal and Hard Rock (albeit not as entertaining nor dynamic as the rest of the album, though, going on for too long), and more of their refined piano notes permeate the air in Find a Reason, a more gripping ballad than the previous song, sounding dense from start to finish and with Carlos passionately declaiming the song’s words while Justin pounds his drums flawlessly. Finally, Gabriel once again brings forward his deep passion for shredding in New Day Rising, a spot-on depiction of their Progressive Power Metal, offering many breaks, variations, complex passages and the usual speed and energy of Power Metal for the delight of admirers of the genre. 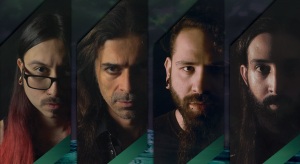 It’s quite easy to join the army of immortals spearheaded by Gabriel, Carlos, Josh and Justin, as their newborn spawn is available from an array of locations including the band’s own BandCamp and webstore, the M-Theory Audio webstore (in CD and limited purple LP format), the Plastic Head webstore (also in CD and limited purple LP format), or simply click HERE for all places where you can buy or stream the album. Also, let’s show our support to those talented metallers by following them on Facebook and on Instagram, by subscribing to their YouTube channel and by streaming more of their music on Spotify. Psychosomatic is undoubtedly the perfect example of how we should face the COVID-19 pandemic, turning our fears, anxiety and hopelessness into ass-kicking metal music like what Immortal Guardian were capable of doing (perhaps not in such majestic way, of course), showcasing once again the positive energy Heavy Metal can bring to us all even during the most difficult times of our lives. Stay home, stay safe, and rock on!

Best moments of the album: Lockdown, Phobia and Goodbye to Farewells.

Worst moments of the album: Candlelight.