This distinguished Italian mafia is here to stay with only one objective in mind: spreading their rousing Rock N’ Roll music all over the world. 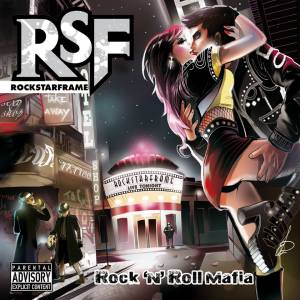 Inspired by the rock music his family played him while he was in a coma after falling from a cliff years ago, which by the way he believes helped bring him back, drummer Max Klein formed Rock N’ Roll/Hard Rock band Rockastar Frame in 2012 in Milan, Italy. Now, after many live performances and after winning several contests such as the national Rock on the Road in 2014, the band is ready to spread their electrifying music all across the world with their debut album, the excellent Rock ‘N’ Roll Mafia.

Obviously, that wouldn’t have been possible without all the talent, hard work and passion for music that have accompanied each band member for years. For instance, frontwoman Faith Blurry recorded vocals for her first commercial on Italian TV when she was only 6; keyboardist Ace Wave holds a summa cum laude degree in classical piano from the Academy of Music, where bassist Andy Di Bella is also finishing up his electric bass studies; and band founder Max and guitarist Morris Steel have been professional session musicians for the past ten years. In other words, all that energy and willpower translates into pure top-notch Rock N’ Roll.

Do you want to know why Rock N’ Roll with piano and keyboards sounds so cool? The opening track, entitled Guilt, has the answer to that question. This is radio material, as catchy as it can be, with the rocking vocals by the red-haired diva Faith matching perfectly with the band’s music. She’s Hot also has all the ingredients to become another instant radio hit, sounding even more powerful than the opening track. Moreover, Ace and Max keep delivering some exciting notes and solos while Faith is totally on fire, and what to say about the song’s chorus? It’s undisputed sexy rock music.

After that kick-ass old school Rock N’ Roll start, the band shows their Alternative Rock side in Addictions, full of background effects and a more atmospheric rhythm thanks to the job done by Ace on keyboards, but quickly returning to their roots in the title-track Rock ‘N’ Roll Mafia. Of course it’s not Deep Purple per se, and it’s not the band’s intention to be so, but this song has a strong Purple-ish vein that makes it truly gripping. It’s not only fast and groovy, but there’s also so much adrenaline in it I believe there might even be some mosh pits when this song is played live. In Song for You, it’s time to slow down and enjoy a nice Rock N’ Roll and Hard Rock ballad where Faith has another beautiful performance while Ace oce again nails it with his piano notes, followed by the heaviest of all songs, This Burning Song, a Hard Rock tune with stronger riffs. It’s a good example of how their “catchy-chorus machine” doesn’t seem to stop for a single second, being highly recommended for fans of straightforward rock music. 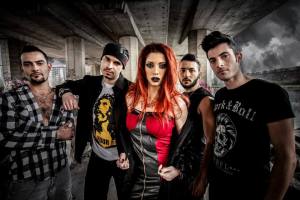 With hints of Blues and its provocative lyrics, the awesome tune Poison has the perfect name and rhythm to qualify it as a hot strip-tease theme, while Cherry Boobs might not be a bad song, but it’s below average, getting a little repetitive after a while. It’s still enjoyable and a good option for a TV ad that needs some rock music, though. The next track, Lie, which is also closer to Alternative Rock than old school Hard Rock, has a very cohesive and creative instrumental with the final guitar solo by Morris being really good, but unfortunately the same can’t be said about Years Gone,  a generic rock semi-ballad that’s too commercial (even if that’s what the band wanted with this song). It doesn’t really harm the overall quality of the album, but it’s just unnecessary filler in my opinion.

That minor “incident” is followed by a sequence of outstanding songs that put the album back on track, starting with RSF (the acronym for Rockstar Frame), a heavy tune with a nice melody and a crucial punch to make it stand out among so many good rock songs in the album. Then we have second song with elements found in the music by Deep Purple (especially in regards to the keyboards), I Don’t Give a Fuck, a very soulful song which old school lyrics fit Faith’s voice nicely; Twisted Double Nature, a modern rock music song that focuses on the passionate vocals by Faith, which ends up enhancing its final result; and finally the last regular track of the album, a fantastic piano ballad entitled Fairytale, where Faith steals the show with her strong but smooth voice. Besides, its lyrics go really well with the music, with kudos to Ace for another amazing performance on keyboards. And if you think 14 hymns of pure rock music are not enough, there’s also an excellent bonus track called Limitless for Life, strongly influenced by 80’s and 90’s Hard Rock.

I personally prefer the first half of the album as I’m more of a metalhead than a rocker, but it’s undeniable that the music by this one-of-a-kind Italian mafia is way above your average rock music (well, the album art says it all). You can check more of their music at their SoundCloud page, give a shout to them on their official Twitter, and of course purchase Rock ‘N’ Roll Mafia at the Musicarchy Media webstore. If you feel you’re ready to join the Rockstar Frame mafia, don’t think twice and succumb to their action-packed rock music. You’re going to love it.

Worst moments of the album: Cherry Boobs and Years Gone.