Enter the gates of Gomorrah and be prepared for an insane feast of first-class Canadian Death Metal that will crush your body and mind.

When most people see the name “Gomorrah”, they automatically associate it with to the city mentioned in the Book of Genesis, the Qur’an and Hadith, the Torah, and the New Testament. But such interpretation has been shifting considerably since 2006 in the world of heavy music, when Canadian Death Metal act Gomorrah was born in the Okanagan Valley of British Columbia as a Black Metal outfit, storming the world with their refined and brutal music. Growing to a bolder form of Death Metal through the years, this talented band is releasing their second full-length album, entitled The Haruspex, an excellent option for fans of the devastating music by Cannibal Corpse, Decapitated and Bloodbath.

Their short but substantial existence, which includes the unique experience of sharing the stage with renowned acts like Suffocation, Cryptopsy and The Agonist, together with the thorough production of the album, allowed this Kelowna-based band to step up their game in The Haruspex, therefore cementing their path in extreme music. Featuring a sinister artwork by artist Kevin Ellis Moore, The Haruspex will promptly assault you and leave you lying on the floor covered in blood, eager for more of the band’s unyielding compositions.

The intro Imperial kicks off the album in a more than ferocious way, giving you a good idea of what’s coming next, the bestial Nine Kings of Sulphur, where its eerie ambience gets stronger with each instrument growing until the song reaches a pulverizing rhythm. Moreover, the technical riffs by guitarist Bowen Matheson magnificently support the deep growling by frontman Jeff Bryan during the entire song. And following that strong start, get ready to be smashed by Gomorrah in Carcosa, a song that will make fans of Deicide and Cannibal Corpse truly happy. The vociferations by Jeff are insanely powerful in this sick tune, not to mention its unstoppable beats (reproduced live by drummer Casey Long-Read). 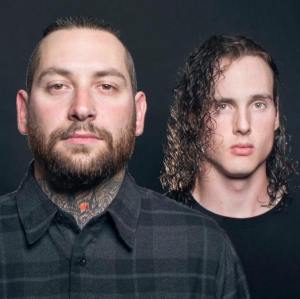 Are you tired already? Because those guys still have a lot more of their demonic music to disturb our minds, beginning with Dismantling The Throne, an extremely poisonous version of Progressive Death Metal where its bass lines (reproduced live by bassist Clayton Harder) add tons of groove to the musicality; followed by Sitra Achra, the epitome of modern Death Metal, being ruthless and harmonious at the same time. Blast beats multiply in the air, while the bass guitar keeps rumbling thunderously, making this one of the best tunes of the entire album. And in Crowns of Flesh, an eerie intro deceives the listener as it takes a few seconds for the band’s nuclear assault to reignite, with its potent riffs and beats alongside the song’s resonant bass lines aiming at dislocating your brain due to the intense headbanging they might cause.

Cerulean is not only an amazing display of Death and Groove Metal where Jeff continues his ode to dementia through his pungent growls, but I personally love when extreme music can be so violent without being played at the speed of light, proving how talented the musicians involved in this band are. Then we have the brutal and melodic Venom and Rapture, where you’ll be instigated to bang your head up and down violently, and Architects, a short instrumental break before one last shot of insanity begins in the form of The Mark of Veritas, a derranged chant where the band’s growls and blast beats come crushing from the very first second. In addition, the fusion of Jeff’s howls and the song’s flammable drumming is outstanding, closing the album on a high note.

If you got psyched up with the music by Gomorrah, go check their Facebook page for more details on the band, including their future tour dates, as well as their YouTube channel and SoundCloud page. And lastly, you can purchase The Haruspex at their BandCamp page or at the Test Your Metal Records’ Big Cartel page. If you dare to enter the gates of Gomorrah, I can guarantee you won’t get disappointed at all with the insane level of destruction this awesome Canadian band can offer you.

Best moments of the album: Carcosa, Sitra Achra and The Mark of Veritas.

Worst moments of the album: Venom and Rapture.

Released in 2016 Test Your Metal Records