OPENING ACTS: Wolves In The Throne Room and At The Gates

If there’s one thing we cannot complain at all in Toronto is the fact that the winter never really hits us hard before the end of December, which means whenever there’s a concert like this Tuesday’s fantastic triumvirate of extreme music with Wolves In The Throne Room, At The Gates and the masters of blasphemy Behemoth at The Danforth Music Hall during their “Ecclesia Diabolica America 2018 e.v.” tour, you can rest assured it will never be too cold nor snowing, allowing any fan to attend the show and have a great time. Well, I guess even if it was -20oC and snowing like hell the concert would have been absolutely SOLD OUT like it actually happened, with about 1,500 metalheads at the venue, and the reason for that is quite simple. All three bands kicked some serious ass with their austere, obscure and hammering music, especially Behemoth, who put up another memorable performance in the city. 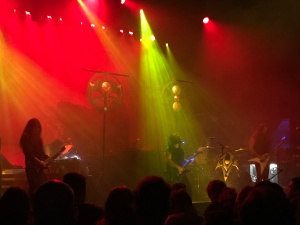 I have to admit I didn’t know much about American Atmospheric Black Metal act WOLVES IN THE THRONE ROOM, formed in 2003 in the city of Olympia, Washington, in the United States, before their show opening for At The Gates and Behemoth this Tuesday, and I’m truly happy with them being chosen to do so. Still promoting their 2017 album Thrice Woven (available from their own BandCamp page), the  band comprised of Nathan Weaver on vocals and guitar, Kody Keyworth on the guitar and backing vocals, Peregrine Somerville also on the guitar, the stunning Brittany McConnell on keyboards and Aaron Weaver on drums (and no, they don’t have a bassist) delivered a solid, entertaining and mesmerizing show, playing only three songs but for around 30 minutes, just the way we love it in Atmospheric Black Metal. If you’re still going to see Behemoth during this North American tour, make sure you get to the venue on time for Wolves In The Throne Room, because watching them on stage is indeed a unique experience. 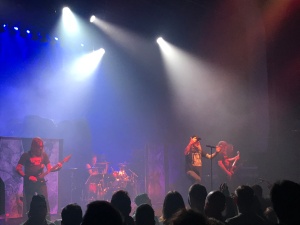 After a quick break it was time for Gothenburg’s own Melodic Death Metal institution AT THE GATES to prove us all why they’re still one of the most relevant bands from the 90’s unparalleled Swedish scene, slaying everything and everyone throughout their entire concert. All fans at the venue enjoyed a lot the flammable performance by frontman Tomas Lindberg and his henchmen, including the songs from their brand new album To Drink from the Night Itself, such as the title-track and A Stare Bound in Stone. Not only their full concert was a feast of first-class old school and modern-day Melodic Death Metal, but it was nice to watch Mr. Adrian Erlandsson smashing his drums once again after so many years, as the last time I saw him playing live was when he was still drumming for Cradle Of Filth. A great drummer, an amazing and charismatic lead singer, and a very entertaining setlist. What else can you ask for in Melodic Death Metal made in the beautiful Sweden, right? 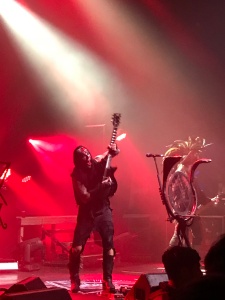 Right after At The Gates ended their show, the speakers started playing the devilish children’s choir from the awesome intro Solve, from BEHEMOTH’s blasphemous and totally amazing new opus I Loved You At Your Darkest, putting us all in a trance and warming up our senses for the storm of Blackened Death Metal we were all eager to witness once again in Toronto. And when our favorite Polish horde started their fulminating performance with Wolves ov Siberia, spearheaded as usual by the iconic Nergal, it was hell on earth at The Danforth Music Hall for the total delectation of the 1,500 fans who took the venue by storm.

Blending new songs from their latest albums I Loved You At Your Darkest, which by the way worked extremely well live like the hypnotizing chant Bartzabel and the beyond blasphemous Ecclesia Diabolica Catholica, and The Satanist, with the ominous hymns Ora Pro Nobis Lucifer (my favorite of the setlist) and Blow Your Trumpets Gabriel being a true invocation of evil, with old school material like the pulverizing Ov Fire and the Void, Slaves Shall Serve and Chant for Eschaton 2000, Nergal and his horde comprised of the extremely sharp and talented Seth on the guitar and backing vocals, the bulldozer Orion on bass and backing vocals, and the stone crusher Inferno on drums were on absolute fire from start to finish, worshiping Satan while delivering the best and most intricate fusion of classic and contemporary Death and Black Metal you can think of, with their masks, costumes and props being the icing on the cake. My only “complaint” is that they didn’t end the show with the fantastic O Father O Satan O Sun!, including those menacing horns and masks, but the closing combo Lucifer, We Are the Next 1000 Years  and the outro Coagvla were awesome anyway. 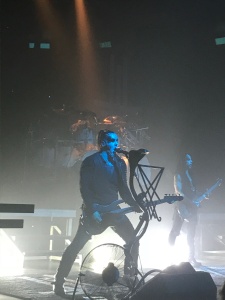 Not only Nergal was extremely happy and excited with the warm reception he received here in Toronto (not to mention the endless, incendiary circle pits beautifully crafted by their, let’s say, “most physical” fans), but seeing such packed venue made him pretty much promise us all that Behemoth will strike us Torontonians once again with their infernal music in a not-so-distant future, and we obviously can’t wait for another bestial performance by one of the most important extreme bands of the current metal scene. Lastly, on a side note, it looks like Behemoth love Toronto even more than we can imagine, as the Polish quartet from hell also played a 7-song setlist at a house party of one of Nergal’s friends the night before as you can see HERE, with the same intensity and energy of their usual concerts at much bigger places. I don’t mind not being invited for those parties as long as Behemoth keep coming back to the city with their insanely heavy and hellish concerts, but if by any chance anyone has a spare “ticket” for that type of event, why not? Just kidding, as I’m not that social, only a metalhead who loves when a band like Behemoth keeps spreading their black wings and unleashing hell upon the earth, showing their love for the city of Toronto as much as we love them back at their darkest.