It’s time to slam into the pit to the vicious Death Metal spawned by this incendiary French band, dealing with a dystopian universe inspired by science-fiction literature. 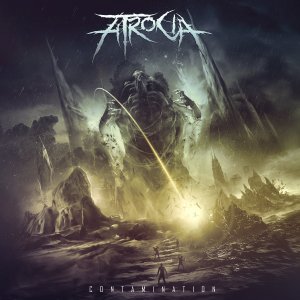 The vicious Death Metal spawned by Saint-Nazaire, Pays de la Loire, France-based act Atrocia correlates with diversity and energy, being inspired by the major figures from the 90’s scene in the United States such as Suffocation, Cannibal Corpse and Death with elements of Thrash Metal and a nuance of Grindcore added to their trademark sound. Dealing with a dystopian universe in their lyrics since their inception in 2003, particularly inspired by science-fiction literature, Atrocia are back in action now in 2022 with their third full-length album, entitled Contamination, with the crisp recording and mixing by Arthur Lauth at Brown Bear Recording, the mastering by Zack Ohren at Castle Ultimate Productions, and the futuristic artwork by Giannis Nakos of Remedy Art Design turning it into a must-listen for fans of the genre while also showcasing all the talent by vocalist and guitarist Julien Lésébos, guitarist Sebastian Fuentes, bassist Arnaud Beilvert, and drummer Pierre Garcia.

The fulminating riffs by Julien and Sebastian kick off the brutal Unleashing The Insurgency, with Pierre’s crushing beats adding even more fuel to the band’s Death Metal machine without showing a single second of peace, whereas more of the band’s vile Death Metal comes in the form of Corridors Of The Living Dead, with Julien barking deeply à la Chris Barnes while Arnaud’s bass and Pierre’s drums fill out every empty space in the atmosphere. In Incorporeal Killer the unrelenting Julien keeps vomiting the song’s bloodthirsty words while Pierre dictates the song’s pace, also bringing forward sick, strident guitar solos; and a beyond sinister intro gradually morphs into a putrid sonority in Monolith, an old school Death Metal extravaganza where the whole band will demolish our senses with their heavy-as-hell artillery.

The second half of the album begins in full force with Iron Corps Icy Stalk, presenting truly melodic riffs and solos by Julien and Sebastian while Arnaud and Pierre show no mercy for our damned souls with their wicked kitchen (despite its second part getting a bit repetitive), whereas Lies brings to our avid ears more of their old school Death Metal for our total delight, with Pierre once again stealing the spotlight with his infernal blast beats. Then a cinematic, cryptic start permeates the air until the band returns with their hellish wall of sounds in Curse Of The Two-Headed Queen Cobra, where their riffs will pierce our minds mercilessly, sounding and feeling absolutely pulverizing in an ode to all things Death Metal. Lastly, the band brings forth over seven minutes of pure savagery titled Embrace The Venom, perfect for headbanging like a beast while Pierre hammers his drums with tons of groove, supported by the diabolical riffs and bass by his bandmates.

In summary, Atrocia more than nailed it with Contamination, which is by the way available in full on Spotify, perfectly adding their dystopian lyrics into their core (and extremely brutal) Death Metal, and if you want to show those French metallers how much you love their music you can buy their new album from their own BandCamp page, from the Great Dane Records’ BandCamp page, from Season of Mist, from Apple Music, or from Amazon, as well as by following them on Facebook and on Instagram, and by subscribing to their YouTube channel. It might have taken a few years after the band’s inception before they could release their first full-length effort, but now we can say such French brigade has been on a roll since their 2012 album Inward Chaos, with Contamination cementing their name in the French underground extreme music scene.

Best moments of the album: Unleashing The Insurgency, Incorporeal Killer and Curse Of The Two-Headed Queen Cobra.

Behold the debut opus by this Nantes, France-based Sludge and Doom Metal entity, narrating epic, anguish-ridden tales of the slow destruction of the planet and sowing seeds of the inexorable vengeance of mother nature. 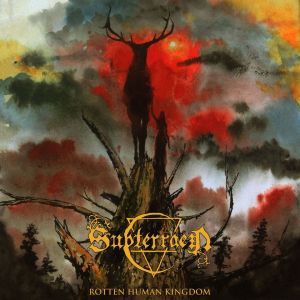 Following the ponderous steps of giants like Eremit and Jupiterian while adding their own darkened grit and weighed down heaviness to the proceedings, Nantes, France-based Blackened Sludge/Doom Metal trio Subterraen has just released their debut opus entitled Rotten Human Kingdom, crafting 10+ minute songs narrating epic, anguish-ridden tales of the slow destruction of the planet and sowing seeds of the inexorable vengeance of mother nature. Formed in 2017, the band comprised of Clem Helvete on vocals and guitars, Chris KKP also on the guitar and Milvus on drums masterfully carries the torch of the style on their newborn spawn, with the crisp recording, mixing and mastering by the band’s own Chris KKP and the cryptic artwork by the talented illustrator Adam Burke (Nightjar Illustration) turning it into a must-listen for admirers of the somber creations by renowned acts such as Eyehategod, Neurosis, , Conan and Primitive Man.

Just like a creature form the abyss the band arises with their sluggish, eerie sounds in the 13-minute doomed feast titled Blood for the Blood Gods, where Clem roars and gnarls demonically while Milvus pounds his drums in the most devilish way possible. Furthermore, their guitar work is also amazing, exhaling darkness and evil, and with all atmospheric, melancholic passages enhancing the song’s taste and punch considerably. Then we have For a Fistful of Silver, an explosion of the most Stygian and darkest fusion of Sludge and Doom Metal, with Clem once again taking the lead with his enraged roaring while Milvus alternates between Black Metal-inspired drums and primeval doom beats. It’s impressive how the music evolves and progresses like if it was the soundtrack to a psychological horror movie, with the dirty and visceral riffs by both Clem and Chris penetrating deep inside your skin. After such avalanche of blackened sounds, it’s time for the trio to enfold us all with the delicate interlude Oceans are Rising, where minimalist guitar lines permeate the air for over two minutes until Clem, Chris and Milvus show no mercy for our souls with the demolishing Blackened Doom Metal aria Wrath of a Downtrodden Planet, a beastly creation by Subterraen where slow and steady beats and malignant ambience provide Clem exactly what he needs to darken our thoughts with his hellish screams, and the music remains as imposing, dense and vile as it can be, all spiced up by their trademark raw, piercing guitars. 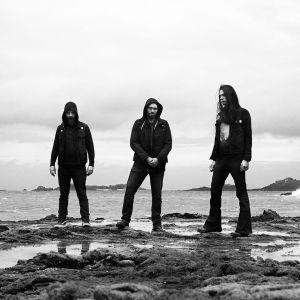 Subterraen’s massive monolith of doom can be appreciated in full on YouTube and on Spotify, but of course in order to show those French metallers your support and admiration go grab your copy of Rotten Human Kingdom from countless locations such as their own BandCamp page, the official Transcending Obscurity Records’ webstore, where by the way you can find an amazing Coffin-Shaped Wooden CD Box Set with Laser Engraving including an 8-panel Digipak CD with metallic effect/UV embossing and sandalwood scent, an autographed certificate, a fridge magnet, a metallic sticker, a gold patch and a badge (also available through their US store), Apple Music, Amazon, Walmart and Strictly Discs, and don’t forget to also follow them on Facebook and on Instagram. As the band members themselves like to say, “from ashes to ashes, from dust to dust”, and in the case of their debut album Rotten Human Kingdom, we can also add to that “from doom to doom.”

Best moments of the album: For a Fistful of Silver and Wrath of a Downtrodden Planet.

In a bold and trenchant move, three dauntless ligériens decided to save humanity from boredom with their exciting and raw mix of Power and Thrash Metal. 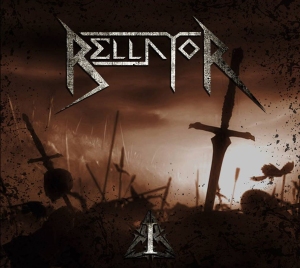 As the end of 2012 was drawing near, the fear that the world was coming to an inexorable and grievous finale started to grow stronger in the hearts of men. However, three dauntless ligériens (Aymeric “Tørick” Plaëtevoet on vocals and guitars, Simon “Nomis” Bonnet on bass and backing vocals, and Thibault “Wilk” Roger on drums) decided to save humanity from utter boredom by forming together a new band named Bellator (which means “warrior” in Latin, just like the famous MMA promotion company), delivering an exciting, raw mix of Power and Thrash Metal recommended for fans of bands like Metallica, Grip Inc., Megadeth and Sepultura.

Hailing from Angers, a city located in Pays de la Loire in western France, about 300 km southwest of Paris, Bellator aim at hitting us hard with the aggressiveness of the music found in their brand new EP titled I, comprised of six straightforward metallic compositions with no shenanigans or artificial elements. Having already conquered several different territories in France such as Nantes, Angers and Rennes with their music, Bellator want to expand their kingdom even more with the release of I, with circle pits and walls of death being mere formalities for these metal warriors.

The initial guitar lines by Tørick in the opening track, Fromlor Agard, already show the listener what Bellator are all about, and when he starts screaming the song’s lyrics accompanied by the metallic bass by Nomis (who also provides some sick backing vocals throughout the entire EP), the music gets even more vibrant and potent. Thrashier and therefore more violent, Petit Orc sounds like a hybrid of Megadeth, Down and Body Count, blending several elements from Thrash, Groove and Speed Metal, with highlights to the amazing job done by Tørick on both vocals and guitar while Wilk maintains the song at a great speed with his precise beats; followed by Padnom, where Nomis increases the heaviness of his bass lines, adding tons of punch to the musicality. After listening to this old school Thrash Metal chant with belligerent vocals and a headbanging rhythm, I believe you will be able to notice they sing all their songs in their mother tongue French, which ends up working extremely well for their music style. 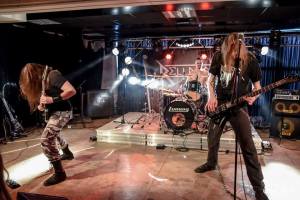 Closer to traditional Power Metal with hints of Thrash and Death Metal, Epic is an instrumental extravaganza showcasing blazing riffs and solos by Tørick and groovy beats by Wilk, with its second half being an ode to Speed Metal the likes of Megadeth. Then we have the song that carries the name of the band, Bellator, an awesome depiction of their core essence displaying enraged growls, fiery guitars and crushing beats, with Tørick inviting us to bang our heads and scream the name of the band manically together with him. And Blood Eagle, the last track of the EP, keeps bursting the band’s trademark aggression, with Tørick and Nomis making an awesome stringed duo (not to mention the bestial deep growls by Tørick), leaning towards modern Groove Metal.

After such solid debut, all metalheads will surely be looking forward for more of Bellator’s antagonistic music in the form of a new EP or, even better, a full-length album. While we wait for their next stride, let’s keep updated with all things Bellator through their Facebook page, YouTube channel, SoundCloud and ReverbNation, and buy a copy of their new EP at their BandCamp page, at the M.U.S.I.C. Records’ webshop or on iTunes. They might not be able to actually save the entire human race only with their music due to the endless amount of shit going on in the world right now, but I’m sure that at least they’ll be able to provide a lot of fun to metalheads worldwide with their high-octane unswerving compositions.

Best moments of the album: Petit Orc and Bellator.