UK’s most visionary and hellish outfit returns with another blast of malignancy and eroticism in the form of the twelfth studio album in their undisputed career.

After their 2015 majestic and imposing album Hammer Of The Witches, British Extreme Metal institution Cradle of Filth had the arduous task of maintaining such high level of malignancy, electricity and eroticism in their brand new opus, stylishly titled Cryptoriana – The Seductiveness of Decay, the twelfth studio album in their undisputed career. Despite not being as fantastic and cohesive as its predecessor, Cryptoriana – The Seductiveness of Decay still brings forward the classic sound by Cradle of Filth we all learned to love through the years, solidifying even more their already distinguished reputation among fans of extreme music.

The band’s iconic mastermind and vocalist Dani Filth said the album “is deeply infused with Victorian gothic horror and thus the title is a reflection of that.’Cryptoriana’ implies the Victorians’ infatuation with the supernatural, the grave and the ghoulish. And the subtitle, ‘The Seductiveness of Decay’, further cements this attraction to death and the glittering lengthy process of self-annihilation”. In addition to that, one very interesting fact about Cryptoriana – The Seductiveness of Decay is that this is their second album in a row with the exact same lineup, which for an ever-changing band like Cradle of Filth is a huge milestone. The artwork was also created by the same artist from Hammer Of The Witches, Latvian designer Arthur Berzinsh, and form that you can have a very good idea of how similar both albums are visually and musically speaking, although as aforementioned the band had an almost impossible mission to surpass Hammer Of The Witches in regards to its exceptional quality.

Exquisite Torments Await can be considered a 2-minute “expanded” intro, showcasing demented and dark noises together with the band’s characteristic melody and potency, already bringing forward their usual blast beats and devilish orchestrations. Well, Dani’s first high-pitched scream says it all. The following tune, the first single of the album titled Heartbreak and Séance, kicks off at full speed with the gentle but powerful guitars by both Richard Shaw and Marek “Ashok” Šmerda bringing balance to the havoc led by the flammable Dani and the insanely talented drummer Martin “Marthus” Škaroupka. In other words, it’s classic and modern Cradle of Filth united in a solid and exciting manner (and don’t forget to check the uncensored version for its official video, it’s definitely worth it). And in Achingly Beautiful, an esoteric beginning quickly explodes into Cradle of Filth’s unique Black Metal, feeling like two or three songs in one due to its complexity and all breaks and variations, with the keyboards by Canadian beauty Lindsay Schoolcraft generating an amazing vibe in the background, not to mention her always pleasant backing vocals.

The main riff in Wester Vespertine reminds me of some of the guitar lines from their 1998 cult album Cruelty and the Beast, more specifically from the classic “Thirteen Autumns and a Widow”, proving Dani knows how to blend the past, present and future of his band in a very cohesive manner. Moreover, Marthus continues his sonic onrush with his potent and unstoppable beats and fills, enhancing the song’s potency considerably. Then it’s time for Richard and Ashok to lead the epic intro in The Seductiveness of Decay, before the band speeds up the pace delivering a neck-breaking, smashing tune tailored for both old school fans and newcomers to the world of Cradle of Filth. Dani has an absolutely flammable performance with his demonic growls and screeches, with the music becoming a symphonic devastation halfway through it with highlights to the awesome solos by Richard and Ashok. And featuring Liv Kristine as a guest vocalist (turning it into some sort of “beauty and the beast” duo with Dani), Vengeful Spirit maintains the album at a high level of seductiveness, vileness and darkness, with Marthus being totally diabolical on drums whereas Lindsay continues to deliver delicate and whimsical key notes to bring more balance to the music.

Despite bringing the trademark wicked lyrics by Dani (“Purring the sweet tempered soughing / Of lucrative Savannah wind / Stirs the great flotsam of clouds that are vowing / To usher the evening in / Affecting the set of the reckoning sun / From burnished gold to crimson hue / Before this night is quite sorely undone / The Devil is coming for you”), You Will Know the Lion by His Claw doesn’t sound as inspired as the rest of the album, presenting generic guitar lines and no gripping moments at all; whereas a beyond imposing beginning, full of symphonic elements, opens the gates of hell for Dani and his bandmates to blast the mysterious and funereal tune Death and the Maiden. Furthermore, a somber shadow remains above the band from start to finish, with Dani spearheading the musicality with his satanic growls, while Marthus and Lindsay craft a truly powerful atmosphere with their respective beats and keys until the song’s hellish finale.

And if I were you I would certainly go for the special edition of the album, which contains two amazing bonus tracks that are worth your additional investment. The first one, named The Night at Catafalque Manor, brings more of Cradle of Filth’s renowned Symphonic Black Metal, with highlights to its amazing orchestrations and the rumbling bass lines by Daniel Firth. Then closing the limited edition we have a flawless cover version for Annihilator’s biggest classic Alison Hell (if you’re from another planet and has never listened to the original version, you can take a shot at it HERE), from their 1989 cult album Alice in Hell. This is indeed a superb tribute to this Canadian institute, and Dani simply nailed it like what he did in the past with other all-time metal hits like Iron Maiden’s “Hallowed Be Thy Name”, Slayer’s “Hell Awaits” and Venom’s “Black Metal”.

Dani and his Cradle of Filth still have a lot of fire to burn in their career, and Cryptoriana – The Seductiveness of Decay is a strong statement that they’re still relevant to the world of heavy music, being capable of producing excellent material year after year. Simply visit Nuclear Blast’s official webstore to pick your version of the brand new album by UK’s most visionary and hellish outfit in the history of extreme music, and be more than prepared for when Dani and his devilish horde take your city by storm with their live performances (if they haven’t done so yet).

Best moments of the album: Heartbreak and Séance, The Seductiveness of Decay and Alison Hell.

Worst moments of the album: You Will Know the Lion by His Claw.

Experience the biggest metal festival in the world, in 3D, and louder than hell. 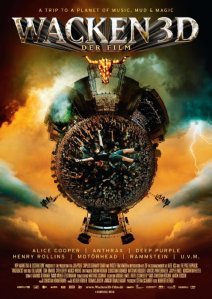 It’s undeniable that Wacken Open Air is the biggest, most exciting and most badass Heavy Metal festival in the entire world. For instance, it only takes couple of days after the festival is over for the next year’s edition to be sold out. If you’ve already had the indescribable pleasure of attending this 4-day monstrous gathering in your life (and I’m pretty sure that if the answer is “yes” you’ve already repeated that metallic ritual many times through the years) you have the chance to go back in time and feel that energy again by watching the awesome documentary entitled WACKEN 3D – LOUDER THAN HELL. And if you’ve never been to Wacken, this is your chance to take a special journey to the heart of the festival, with the 3D screening making you feel like you’re right there with over 75,000 metalheads from all over the world celebrating life and heavy music.

Filmed with 18 stereoscopic 3D cameras during the 2013 edition of the festival, this excellent documentary by award-winning director Norbert Heitker will show you exactly what happens once a year to a calm farming village in the middle of a Northern German countryside, when it becomes the centre of the universe for all things metal. You’ll be able to see in details what it is to camp at Wacken, the daily routine of fans and bands, what musicians think of the festival, and even go crowd-surfing and mud-diving with the more lunatic fans. Not only that, you’ll also have a good time watching some electrifying performances by metal giants such as Deep Purple, Anthrax, Motörhead, Rammstein, Alice Cooper, Lamb Of God, and many more. 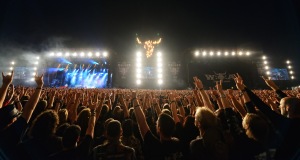 In my opinion, as a huge supporter of the underground of heavy music, the best part of the entire documentary is when they focus on some of the national winners of the already famous Wacken Metal Battle, showing what it is to be an up-and-coming band playing at the most important metal festival on earth. There are awesome bands from Uruguay, Romania, Canada and so on showcasing their music to thousands of fans, but my favorite one in terms of creativity and feeling were the Chinese Metal Battle winners Nine Treasures. All members of the band are from Inner Mongolia, with all lyrics being sung in Mongolian, which is beyond incredible. You have to watch it to understand what I’m talking about, and if one day those guys read this review, I would like to ask them to kindly send us their material for review. It would be a huge pleasure for us at The Headbanging Moose to do that. 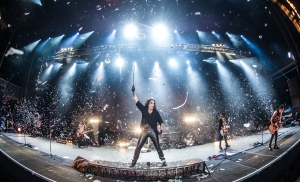 In case you live in Canada and do not have any plans for tonight (well, even if you do have plans you should definitely cancel them), there will be a special WACKEN 3D – LOUDER THAN HELL “One Night Only Across Canada” event today, October 29 at 7:30pm at several Cineplex theaters. You can check more details at the official Facebook event, see where the movie will be playing by clicking HERE, and also grab your tickets at the official Cineplex website. In addition, following the Cineplex Yonge-Dundas screening in Toronto, Steve “Lips” Kudlow and Robb Reiner of Anvil will be in attendance for a Q&A, and if you cannot make it today but you live near Ottawa the movie will also be playing soon at the Mayfair Theatre, located at 1074 Bank Street, Ottawa, Ontario.

Best moments of the movie: The unique moments of glory provided by the Wacken Metal Battle bands from different countries, the iconic Rammstein playing Du Hast with thousands of fans screaming the lyrics together with the band and, of course, all the classy mud scenes.

Worst moments of the movie: The fact that there were no subtitles when a fan or a band spoke in a language different than English, especially when it was in German. At least the version I saw had no subtitles. Oh, and unfortunately there were no interviews with Lemmy.