The German butchers of Thrash Metal struck back in another diabolical night of heavy music in the city of Toronto. 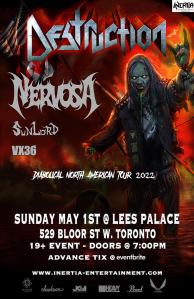 There’s nothing better than ending another fun weekend and getting ready for a cold and rainy Monday than a night of pure Thrash and Death Metal, and that’s exactly what several Torontonian metalheads were able to enjoy last night at Lee’s Palace thanks to the ruthless Diabolical North American Tour 2022, with the bands VX36, SUNLORD, NERVOSA and the iconic DESTRUCTION offering their fans exactly what they needed to slam into the pit and raise their horns nonstop. The first band to hit the stage was Geyserville, California-based Thrash/Groove Metal band VX36, led by vocalist and guitarist Nate Klug, who inspired all thrashers at the venue to bang their heads to great songs such as Satan’s Fury and Blood War. That was an excellent start to the night, and I just wish the band had new material to present as everything they played, despite being awesome, was from over seven years ago I believe.

After a really, really quick break, it was time for Jackson Heights, New York’s own Heavy/Speed Metal trio SUNLORD to kick some ass on stage. Comprised of vocalist, guitarist and founder Alfonso Ferrazza, bassist Ashely Wells and drummer Lamar Little, the band delivered a solid show including the fun songs Forbidden Witch and Turn Me Loose, with Lamar stealing the spotlight with a beyond professional and thrilling performance behind his drums, adding an extra touch of groove and heaviness to the band’s music. In the end, Sunlord might not be as thrash as the other bands from the night, but they definitely proved why they were chosen to open for Nervosa and Destruction with their energy and passion for heavy music. 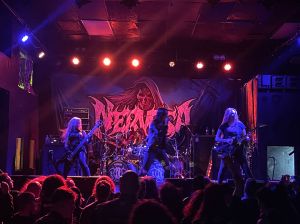 Finally, after years and years waiting, I was able to see for the first time ever the all-female thrashing machine NERVOSA pulverizing everything and everyone live on stage. One of the most multinational bands of the current metal scene, as the band is now formed of Spanish frontwoman Diva Satanica, Brazilian guitarist and founder Prika Amaral, Italian bassist Mia Wallace and Greek drummer Eleni Nota, the quartet was infernal with their fusion of Death and Thrash Metal from start to finish, with the stunning Diva Satanica not only showcasing a breathtaking vocal performance, but her stage presence was also a thing of beauty. Still promoting their 2021 opus  Perpetual Chaos, Nervosa made a lot of awesome noise playing songs the likes of Kill the Silence, Masked Betrayer, Into Moshpit, Guided By Evil and Under Ruins, as well as my favorite ones of the night, Genocidal Command, Time to Fight and Rebel Soul, where not only Diva Satanica was flawless on vocals, but Prika, Mia and Eleni were also smashing their instruments in great fashion. I just wish the girls had some time to interact with their fans at their booth (which apparently was reduced to just a few random items as their shirts couldn’t be delivered on time), but again, what really matters is what they do on stage, and they more than succeeded by inflicting that nice pain in our necks due to all headbanging involved.

Another short break and there they were, German Thrash Metal institution DESTRUCTION, ready to show everyone at Lee’s Palace what old school thrash is all about. Anything I say about the band’s frontman and mastermind Schmier won’t be enough to depict his energy, his charisma and his onstage performance, kicking ass from the very first second and showing absolutely no mercy for our souls armed with his metallic bass and raspy vocals. Blending classics the likes of Nailed to the Cross, Born to Perish, Mad Butcher, Thrash Till Death, Bestial Invasion and The Butcher Strikes Back with songs from their recently released album Diabolical, including the amazing title-track and the pulverizing No Faith in Humanity, Schmier and his henchmen Damir Eskić and Martin Furia on the guitars and Canadian beast Randy Black on drums gave a lecture in Thrash Metal to their fans, showing why they’ve been alive and kicking since their inception in the distant year of 1983. By the way, close to the end of the show, Schmier had some very nice words to say about a guy that was present at the venue who was their first ever North American fan, being the first person in the US and Canada to purchase their 1984 demo Bestial Invasion of Hell. That was a really cool moment, and that guy, who was not too far from where I was standing, seemed deeply touched by such amazing tribute by one of his favorite bands of all time. That’s pure Thrash Metal, and after all was said and done (already past midnight, by the way), we were all certain those Teutonic metallers will return to destroy Toronto once again in a not-so-distant future.