A beautiful tribute to the life of the Metal Mayor of Toronto and his undisputed passion for heavy music.

If you have no idea who Walter Froebrich was, let’s say he was the Metal Mayor of Toronto, as I’ve seen many people referring to him as. He was in pretty much every metal concert we all attended i the city in the past 20 years, from Heavy Metal to Death and Black Metal, from Thrash Metal to Deathcore and Viking Metal, and so on, always holding a few beers, always raising the horns, always surrounded by friends, and always supporting metal music no matter what. He even had his own motto, “AM HERE.” Sadly, in November 2022 due to lack of proper healthcare by the Toronto authorities Walter passed away at home after several visits to the hospital, and that brought a lot of grief to all metal fans in the city. If he had received a proper service, if he had been through the required scans and so on, he would still be around us. He will be extremely missed by the metal community in all upcoming concerts in Toronto, no doubt about that. I was going to use the common expression “may his soul rest in piece”, but I’m sure Walter himself would prefer a slight adaptation of it, “may his soul rest in metal”.

That’s why on January 7 the Toronto scene came together to celebrate Walter’s life and his passion for heavy music at The Rockpile with the Walter Froebrich Memorial Show, an event organized by Steve Hoeg, Drew Masters, Junior Jr LeClerc and Jake Disman, among others, with no more, no less than TWENTY SEVEN bands playing from 1pm until midnight to a sold out venue, while money for Walter’s family was raised through a silent auction and a 50/50 draw. Unfortunately due to personal reasons I could not attend the celebration, but my friend and photographer Keith Ibbitson of Lower Eastside Photography was there to capture some amazing shots of the entire show, and to provide us with a sense of how awesome everything was and how happy Walter must be whenever he is right now with his homage.

In Keith’s own words, “we raised over 17,000 dollars for Walter’s family. It was a sold out show. All the bands were absolutely amazing! Drew Masters was the MC for the evening. The friends Walter made over his concerts outings just blew my mind! Each one is family, the metal community is one big family, they come together for each other like no other.” And as you can see from the photo gallery below, it was indeed a night to remember, a celebration of life and metal, exactly how Walter would have liked it to be. Here are all the fantastic bands that were on the bill, and as many people have said Walter would have certainly taken a selfie with each one of them…

In the Facebook page to the event you can find a lot more details about the whole thing, see other photos taken by different attendees, other posts and discussions around Walter and the metal community in Toronto, and so on, as well as a very nice summary of the night on the video below. RIP WALTER! AM HERE!

“Life is funny. If you don’t laugh, you’re in trouble.” – Taylor Hawkins

And just like that, after 880 days of nothing, I was finally able to attend a metal concert this year, just like countless other metalheads who patiently waited for the Canadian government to lift all restrictions due to the pandemic to get back to our normal lives. And it was a busy year concert-wise as you can see HERE, with Judas Priest, Lamb of God, Megadeth, Iron Maiden, Cannibal Corpse, Trivium, Amon Amarth, Arch Enemy, Behemoth and several others putting a smile back on our faces and the horns back in our hands, because in the end the beauty of heavy music is when it’s played live, right? On the other hand, we unfortunately saw some important names of the global metal scene disbanding such as Nuclear Assault, Tristania and Every Time I Die, plus of course the brave warriors who left us and are now sitting beside the metal gods in Valhalla. Just to name a few, we all mourned the losses of Fredrik Johansson (former guitarist of Dark Tranquillity), Jon Zazula (co-founder of Megaforce Records), Bruce Greig (former guitarist of Misery Index and Dying Fetus), Taylor Hawkins (drummer of Foo Fighters), Ronnie Deo (former bassist of Incantation), Trevor Strnad (vocalist of The Black Dahlia Murder), Alec John Such (former bassist of Bon Jovi), Bob Heathcote (former bassist of Suicidal Tendencies), Steve Grimmett (vocalist of Grim Reaper), Stuart Anstis (former guitarist of Cradle of Filth), David Andersson (guitarist of Soilwork), and Dan McCafferty (former vocalist of Nazareth). 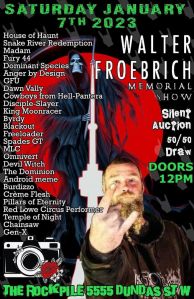 However, one of the biggest losses in the world of heavy music happened right here in Toronto, Canada, as we lost the biggest metalhead of the entire Torontonian scene, Walter Froebrich.  Our super fan Walter, who was a staple in the local scene for over 20 years (and I remember seeing him in every single concert I’ve attended in the past 10 years or more at least), sadly died alone at home last month following three visits to a local hospital due to severe abdominal pain. This is extremely tragic and cannot happen again, as we all have the right to decent healthcare it doesn’t matter who we are. There will be a memorial show for Walter on January 7, 2023 at The Rockpile (details can be found HERE and tickets HERE) with several local independent bands, and we at The Headbanging Moose also want to honor the life of Walter and his undisputed passion for heavy music by dedicating to him The Headbanging Moose’s Top 10 Hard Rock/Heavy Metal Albums of 2022, excluding EP’s, best of’s and live albums.

1. Kreator – Hate Über Alles (REVIEW)
Let the hate flow through you to the sound of the magnificent new opus by one of the trailblazers of the German Thrash Metal scene.
Best song of the album: Hate Über Alles

2. Lorna Shore – Pain Remains (REVIEW)
The most explosive name of the current Deathcore scene invites us all to dance like flames to the sound of their newborn masterpiece.
Best song of the album: The Pain Remains Trilogy

4. Rammstein – Zeit (REVIEW)
Germany’s own Neue Deutsche Härte institution wasted no time during the pandemic and is back in action with their fantastic eight opus.
Best song of the album: Angst

6. Arch Enemy – Deceivers (REVIEW)
One of the most important names in metal is back in action with their most solid and detailed album with Alissa White-Gluz on vocals.
Best song of the album: The Watcher

7. Lamb of God – Omens (REVIEW)
Ignore the omens and listen to the pulverizing new album by one of the best and most dynamic metal bands of the past two decades.
Best song of the album: Ditch

8. Amon Amarth – The Great Heathen Army (REVIEW)
Join the great heathen army spearheaded by one of the most respected bands of the current metal scene.
Best song of the album: Saxons and Vikings

9. Hiss From The Moat – The Way Out Of Hell (REVIEW)
There’s only one way out of hell, and that’s to the sound of the incendiary Blackened Death Metal by this Italian horde.
Best song of the album: Generation Of Cowardice

And here we have the runner-ups, completing the top 20 for the year:

In addition to all that, let’s bang our heads with our Top 10 EP’s of 2022 to prove once and for all that not all great albums of the year have to be so long. The EP’s from this list are simply awesome, showcasing the band’s talent and their ability to sound epic even if the music lasts for only a few minutes.

Do you agree with our list? What are your top 10 albums of 2022? Also, don’t forget to tune in every Tuesday at 10pm BRT on Rádio Coringão to enjoy the best of classic and underground metal with Jorge Diaz and his Timão Metal, and every Thursday at 8pm UTC+2 on Midnight Madness Metal e-Radio for the best of underground metal with The Headbanging Moose Show! And if you lost some or most of our special editions of The Headbanging Moose Show, including our Top 20 Underground Albums of 2022 – Parts I and II, go to our Mixcloud page and there you have hours and hours of the best of the independent scene, sounds good?

Metal Xmas and a Headbanging New Year! See you in 2023!

And before I go, I’ll leave you with what’s in my humble opinion not only the best song of 2022, but it also carries a very inspiring message to us all… ROW! ROW! ROW!